I am Ada Palmer, an historian, novelist, and composer, and a professor in the History Department at the University of Chicago.  (Contact by e-mail)  I study heterodoxy, heresy, freethought, censorship and information control, the recovery of classical thought after the Middle Ages, its impact on science, religion and atheism, and the history of the book and printing. My focus on the Renaissance frequently takes me to Rome, Florence and around Europe.  I often do research at rare books libraries like the Vatican.  My first academic book Reading Lucretius in the Renaissance treats the recovery of classical atomist physics in the 15th and 16th centuries how humanist reading practices protected and disseminated radical science (see it on Amazon).

I also write science fiction and fantasy.  My first novel Too Like the Lightning, begins the four volume science fiction series Terra Ignota. It came out from Tor in 2016, and received the Compton Crook Award, was named to the Tiptree Award Honors List, and is a finalist for the Best Novel Hugo Award. The second and third volumes Seven Surrenders came and The Will to Battle came out in 2017. Terra Ignota is now a finalist for the Hugo Award for Best Book Series. You can order them from Powell’s, Barnes & Noble (also on nook), Amazon, through Kobo, use Indiebound or Goodreads.

Here is an article about me and my range of interests in UChicago Magazine (February 2018). 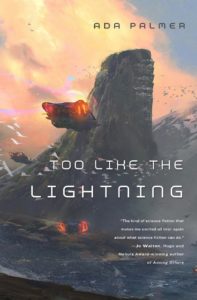 “Ferociously intelligent, narrated in a ravishing voice, Too Like the Lightning is the kind of science fiction I’ve been craving for years.” – Sherwood Smith

“In an age when science fiction tropes are cycled through every variety of mass media to the point of numbing familiarity, can an SF novel still surprise us?  Yes, if that novel is Ada Palmer’s Too Like the Lightning.  The writing is bold, furiously inventive, and mesmerizing.  The novel’s thematic concerns place it in the great tradition of philosophically and historically savvy science fiction, but it addresses those concepts in wholly new and startling ways.  It’s the best science fiction novel I’ve read in a long while, and it stands as powerful evidence that the sf genre is still a treasure box overflowing with wonders.” – Robert Charles Wilson

“Too Like the Lightning is a brilliant matryoshka tale that spans classical philosophy and far-future technology, weaving both together through a complex fabric of characters and intrigue in Palmer’s vivid future utopian society. Aspects of the book may bring to mind the sweeping scope of Asimov’s Foundation series, Stephenson’s Baroque Cycle, Thomas More’s Utopia, and even the numerous layered intricacies of 15th century Dutch painters like van Ecyk and Breugel. Despite such weighty forebears, the interplay of light and beauty — and play itself — within the depictions of Palmer’s layered narrative evoke a virtuosity that inspires multiple reads and passionate discourse. An exquisite and daring debut. This is a book I expect to acquire several copies of, for sharing and keeping both.” – Fran Wilde. 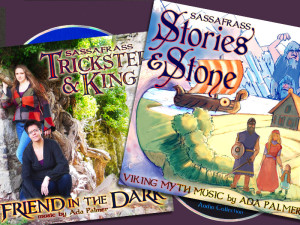 Music and Other Nonfiction:

In addition to my scholarship and fiction writing, I blog about books, comics, history and culture for Tor.com, and I compose SF, fantasy and mythology-themed music, and perform with the a cappella group Sassafrass.  My most recent musical project is Sundown: Whispers of Ragnarok, a Viking mythology song cycle focused on Snorri Sturlson, and on the stories surrounding Odin and Loki and the death of Baldur. The project is now available digitally and on CD and DVD.  I am active in the science-fiction, fantasy, and anime fan communities, and frequently attend or staff conventions (especially Anime Boston and Vericon).  I also study anime and manga, publish on Japanese pop culture, founded TezukaInEnglish.com, and do consulting work for publishers including ADV, FUNimation, and Tezuka Productions.

For more information about my activities and publications, please visit AdaPalmer.com

“Ex Urbe” means “from the city”, and in the ancient world and the Renaissance, signing a letter “Ex Urbe” meant it was sent from Rome.  While I am not always in Rome, for me “Ex Urbe” means that I am always writing in the cultural vein which emerged from Rome’s long history.  Whether I’m discussing the scandals of the Borgia popes, fragments of Greek mystery cults preserved by Roman followers, or the hazards of the Italian post office, it’s all “from the city.”  This is in some ways a travel blog, mixing my adventures from research trips with historical tidbits, plus photos, restaurant and museum reviews, and recipes, and occasional fun fantasy & science fiction things.  But most of the content concentrates on history and philosophy, and examining the interaction between events and ideas, which has always been what most excites me about my work as an historian.  For me, Ex Urbe is a way of sharing the exciting ideas and discoveries I encounter in my research and teaching, but in an open forum, free from the constraints and slow time table of academic publishing.

From 2015-2017, another excellent assistant, Mack Muldofsky, joined me on Ex Urbe (and in many aspects of my work) as an editor, researcher, web helper, and occasional blog contributor.

Earlier, in 2012-2013, another good friend, Carl Engle-Laird, helped me on Ex Urbe doing editing, research & web support. He has moved on to editing genre fiction for Tor.com, but was a great help while we worked together, and his touch is still on the site here and there.

Comments are great and I always look forward to them.  That said, this is a public blog, and I want to keep it a friendly space for all comers.  I post nothing here that I wouldn’t be comfortable having read by my friends, students, colleagues, and publishers.  I appreciate it when commentators exercise comparable restraint, avoid aggressive behavior, and confine private things to private spaces.  Thank you.