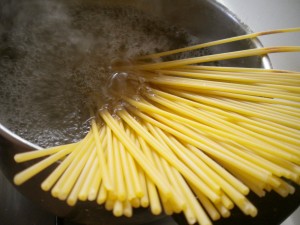 Pasta is my staple. Plain pasta with just a little olive oil, or butter, maybe white pepper and herbs from the garden, even with a store-bought sauce straight out of the jar, is so satisfying and easy that I have to find something pretty good (and pretty easy) to justify cooking anything else.

The National Pasta Museum of Italy, the most delightfully tourist-trappy museum in all Rome, is a propaganda factory dedicated to convincing visitors that pasta is the perfect food, was invented in Italy rather than being based on Marco Polo’s experiences in China (wrong!), and that it can single-highhandedly end world hunger. There is, however, some substance to their motto, “if flour is silver, semolina is gold.” Real semolina flour tastes much better than ordinary wheat, and is much higher in protein – in fact it has as much protein per ounce as chicken breast. The quality of a pasta is thus dependent on the quality of the semolina used. While all pasta is good, if you’re used to common store brands, try an imported Italian brand once or twice and you can tell the difference. Is it always worth seeking out imported pasta? In my opinion no, but it is when you’re doing something delicate. If you’re eating pasta with just herbs and oil to maximize the flavor of a new crop of spicy Thai basil blossoms, for example, then go for the good noodles; for a red sauce, you won’t notice so much, so better to save the fifty cents. Always remember, though, that better pasta made with better semolina retains its firm “al dente” texture longer, so if you often accidentally wait too long to take it out of the water, using better quality noodles will avoid mush.

One of my long-time cooking goals has been to achieve a delicious pasta sauce that can be made in the time between putting the pasta in the water and draining it, and that has minimal clean-up and non-perishable ingredients, so you can have them constantly on-hand. The winning sauce is a variant on Amatriciana, a […]

This staple Roman pasta uses a rich tomato sauce made with pancetta or guanciale (i.e. bacon), often with pecorino cheese and onion, and spicy red pepper. It is named for the town of Amatrice, in Lazio outside Rome, where it originated, but it is now a signature of Roman cooking and the Roman recipe differs […]

Another Roman signature pasta, carbonara has lots of contradictory origin stories, but  the name is related to “carbon” or coal, and it was first recorded as a Roman dish during WWII.  It involves coating the pasta with a mixture of egg yolk and cheese, accented with pancetta (bacon) and black pepper.  It is fast, rich, […]