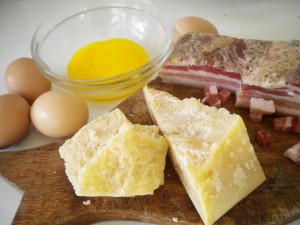 Another Roman signature pasta, carbonara has lots of contradictory origin stories, but  the name is related to “carbon” or coal, and it was first recorded as a Roman dish during WWII.  It involves coating the pasta with a mixture of egg yolk and cheese, accented with pancetta (bacon) and black pepper.  It is fast, rich, easy and very different from standard red and cream sauces, and a style you rarely find in the US.  Carbonara is not a sauce but a process in which the egg yolks are cooked by the heat of the pasta itself, so there is no “carbonara sauce” that you can prepare ahead of time, though the noodles reheat very well, and cold carbonara has much the vibe of cold pizza.  There are two fiercely-adversarial camps, those who include cream in their carbonara and those who don’t; cream is more common in northern Italy and overseas, so many Americans think of carbonara as a cream dish, which Romans don’t.  Spaghetti is the shape of choice, but fettuccine or bucatini and occasionally rigatoni are used.  Just don’t use it on anything like rotini or shells or the cheese and egg will all collect inside the big crevices and make it weird.

My recipe is my own and certainly not identical to any you would find in Italy, but it’s a practical way to make it taste good with easy ingredients.