Some announcements, and a small fun thing to share. First, I have written an essay on Plato, historicity and metaphysics, based on my experiences teaching the Republic to undergraduates and responding to Jo Walton’s The Just City. It is up on Crooked Timber as part of a set of responses to The Just City, and the essay has plenty of elements to enjoy even if you haven’t read the book.

Second, due to a recent policy change in Italy’s national museums I was able to finally take literally thousands of photos of artifacts and spaces in museums that have been forbidden to cameras for years. I’ve started sharing the photos on Twitter (#historypix) so follow me on Twitter if you would enjoy random photos of cool historical artifacts twice a day.

Meanwhile I don’t yet have another full essay ready to post here, but I’m happy to say the reason is that I’m working away on the page proofs of Too Like the Lightning, the final editing step before the books go to press. I’ve even received a photo from my editor of the Advanced Release Copies for book reviewers sitting in a delicious little pile!  It’s fun seeing how many different baby steps the book is taking on its long path to becoming real: cover art, page count, typography, physicality in many stages, first the pre-copy-edit Advanced Bound Manuscripts, then the post-copy-edit but pre-page-proof Advanced Release Copies, evolving toward the final hardcover transformation by transformation.  My biggest point of suspense at this point is wondering how fat it will be, how heavy in the hand…

And now, a quick piece of history fun:

There is a dimly-lit hallway half way through the Vatican museum (after you’ve looked at 2,000 Roman marbles, 1,000 Etruscan vases and enough overwhelming architecture to make you start feeling slightly punchy) hung on the left-hand side with stunning tapestries of scenes from the life of Christ based on cartoons by Raphael. But on the right-hand side in the same hallway, largely ignored by the thousands of visitors who stumble through, is my favorite Renaissance tapestry cycle, a sequence of images of The Excessively Exciting Life of Pope Urban VIII.  My best summary of these images is that, when I showed them to my excellent friend Jonathan (author of our What Color is Pluto? guest post) he scratched his chin and said, “I think the patronage system may have introduced some bias.”  And it’s very true, these are an amazing example of Renaissance art whose sole purpose is excessive flattery of the patron, a genre common in all media: histories, biographies, dedications, sculptures, paintings, verses, and, in this case, thread.

These tapestries are fragile and quite faded, and the narrow hallway thronging with Raphael-admirers makes it awkward to get a good angle, but with much effort I think these capture the over-the-top absurdity which makes these tapestries such a delight. Urban VIII now is best known for engaging in unusually complicated military and political maneuvering, expanding and fortifying the papal territories, pushing fiercely against Hapsburg expansion into Italy, finishing the canonization of St. Ignatius of Loyola, persecuting Galileo, commissioning a lot of Bernini sculptures, and spending so much on military and artistic expenses that he got the papacy so head over heels in debt that the Roman people hated him, the Cardinals conspired to depose him (note: it usually takes a few high-profile murders and/or orgies to get them to do that, so this was a LOT of debt), and his successor was left spending 80% of the Vatican’s annual income on interest repayments alone.  But let’s see what scenes from his life he himself wanted us to remember:

My favorite is the first: Angels and Muses descend from Heaven to attend the college graduation of young Maffeo Barberini (not yet pope Urban VIII) and give him a laurel crown. If all graduation ceremonies were this exciting, we’d never miss them! Also someone there has a Caduceus, some weird female version of Hermes? Hard to say. And look at the amazing fabric on the robe of the man overseeing the ceremony.

Second, Maffeo Barberini receives the Cardinal’s Hat, attended by an angel, while Pope Paul V who is giving him the hat points in a heavy-handed foreshadowing way to his own pope hat nearby. What could it mean?! 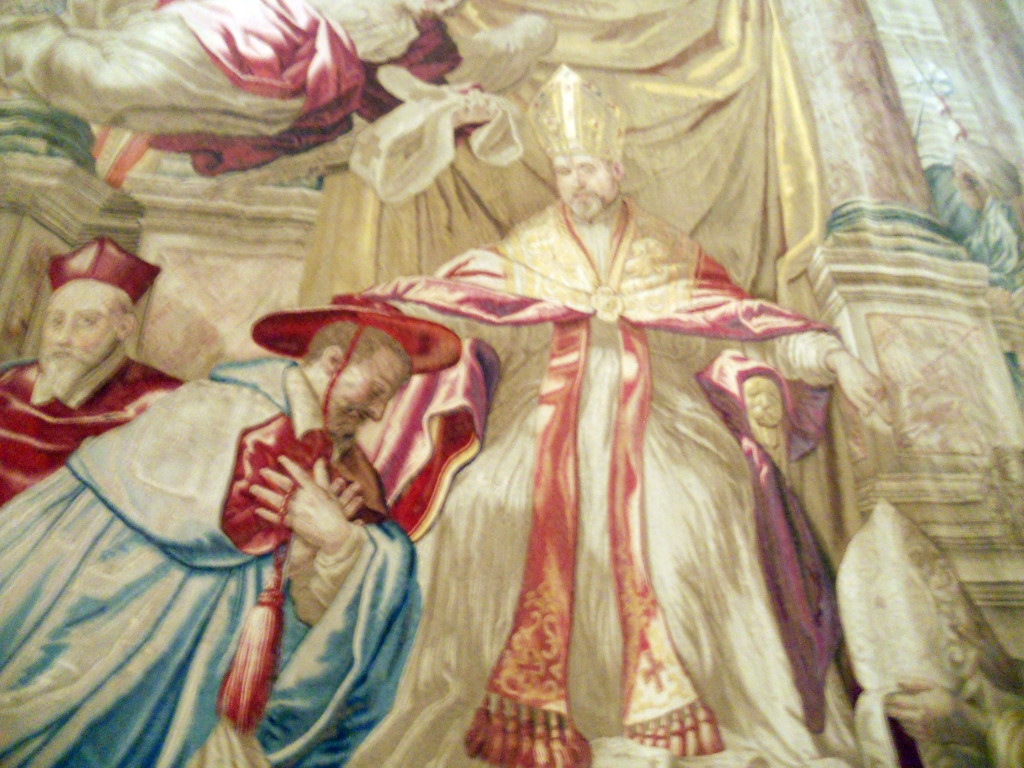 Next, the fateful election! Heavenly allegories of princely virtues come to watch as the wooden slips are counted and the vote counter is astonished by the dramatic result! Note how, propaganda aside, this is useful for showing us what the slips looked like. 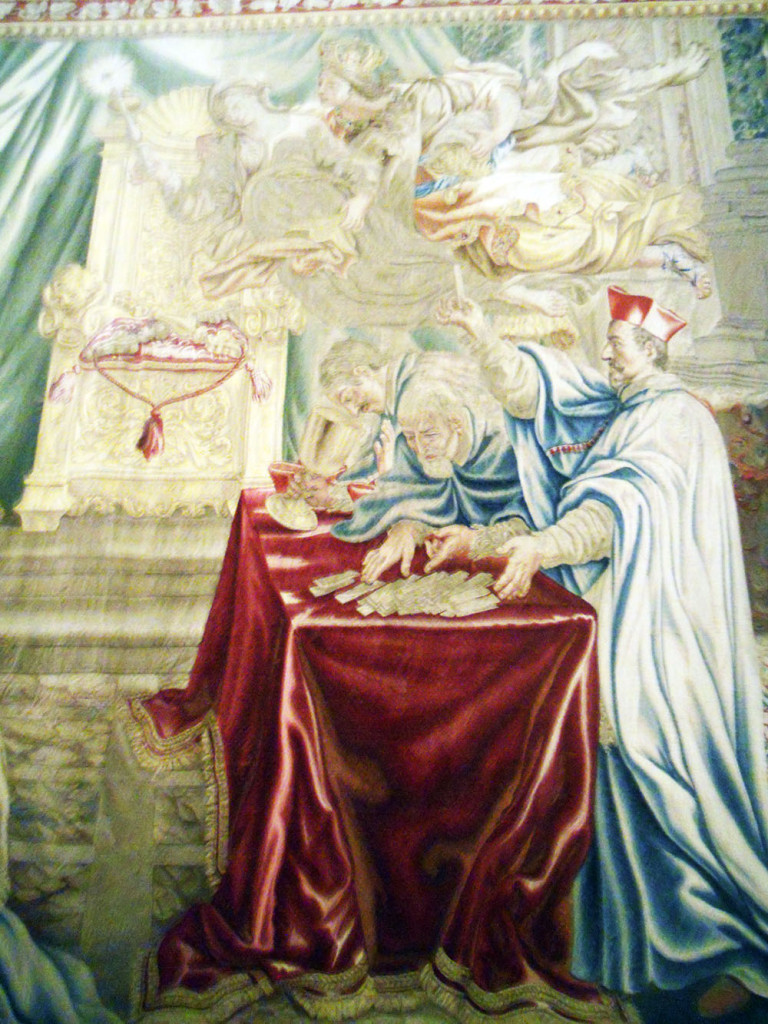 In the one above I particularly like the guy who’s peering into the goblet to make absolutely sure no slips are stuck there: 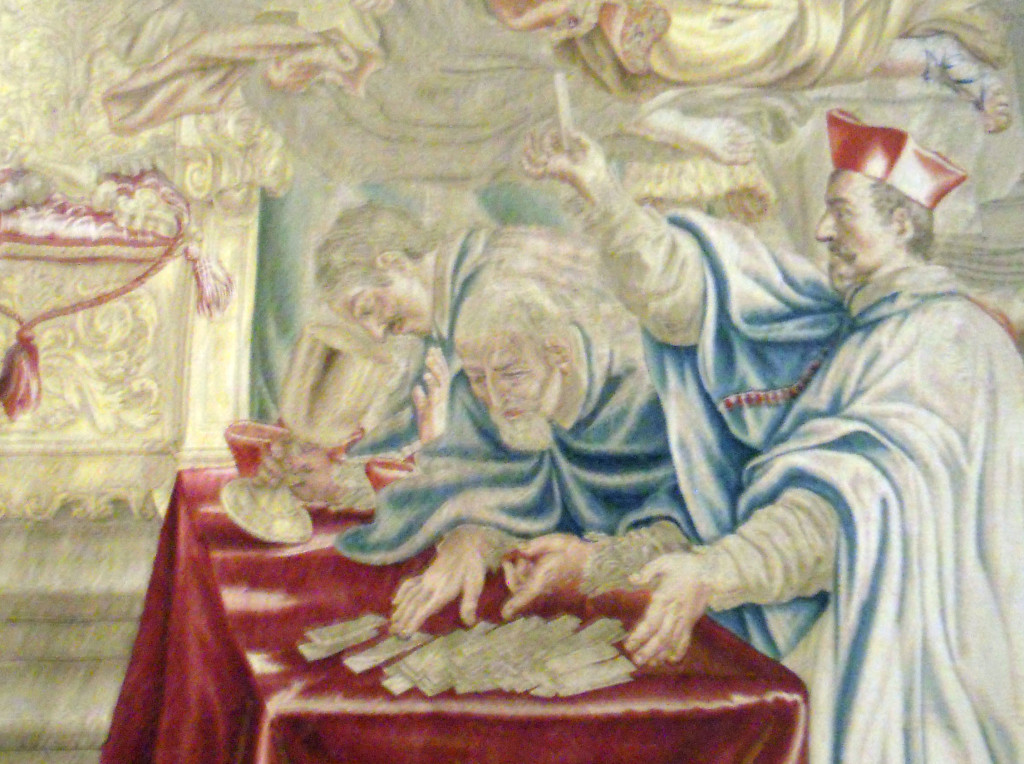 On the other side of the same scene, our modest Urban VIII is so surprised to be elected he practically swoons! And even demands a recount, while the nice acolyte kneels before him with the (excessively heavy) papal tiara on a silver platter. 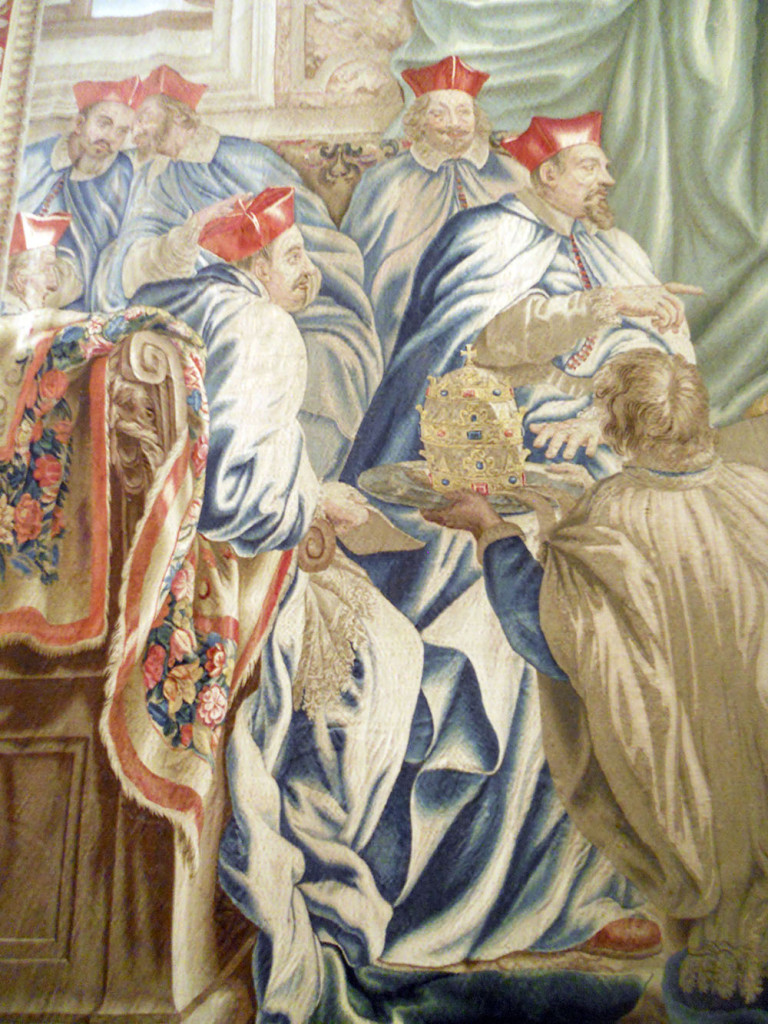 Now Urban’s adventures as pope! He breaks ground for new construction projects in Rome, attended by some floating cupid creature holding a book for the flying allegorical heart of the city: 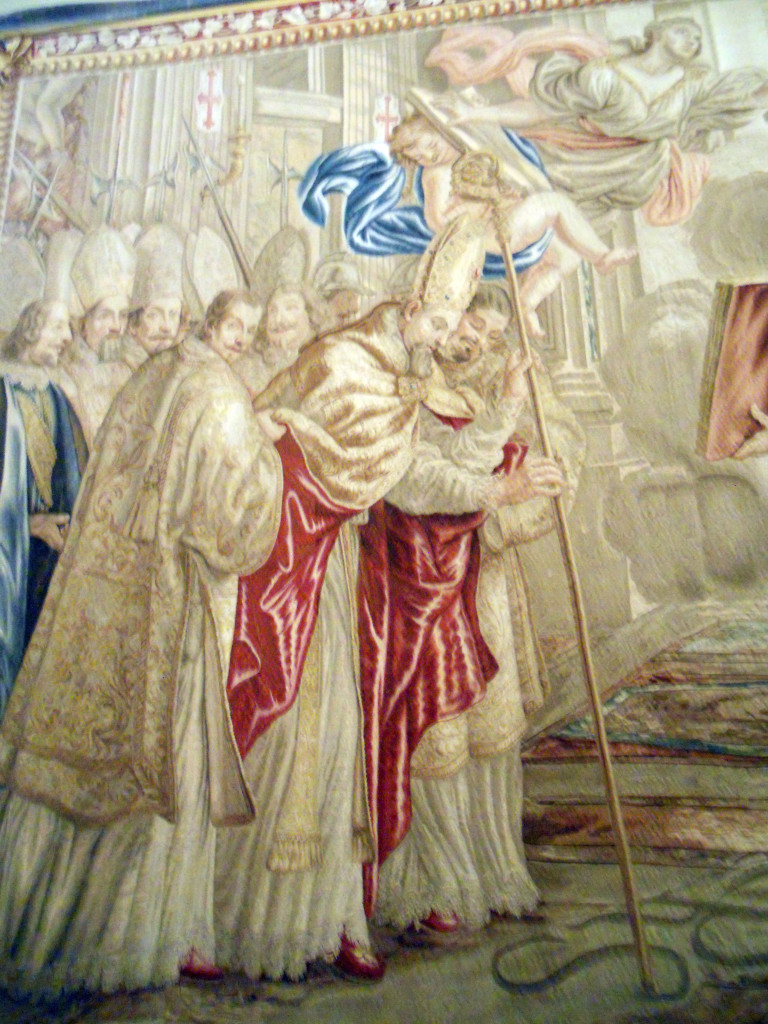 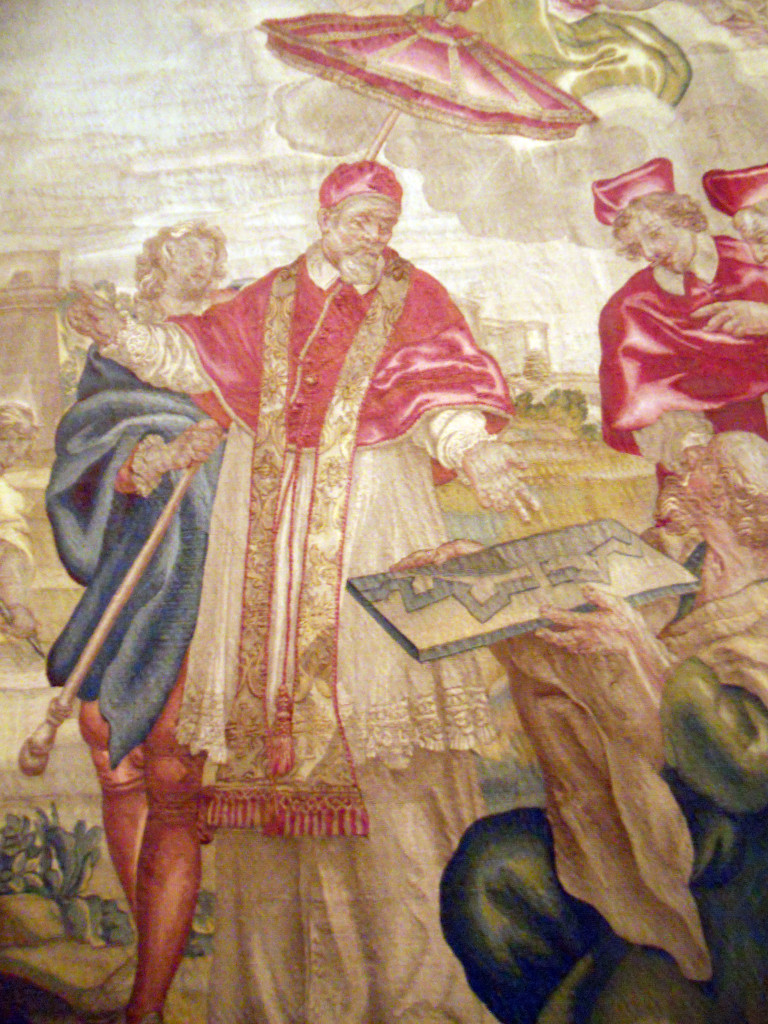 He makes peace between allegorical ladies representing Rome and Etruria (the area right next to Rome: note, if there is strife between Rome and Etruria in the first place, things in Italy are VERY VERY BAD! But the tapestries aren’t going into that): 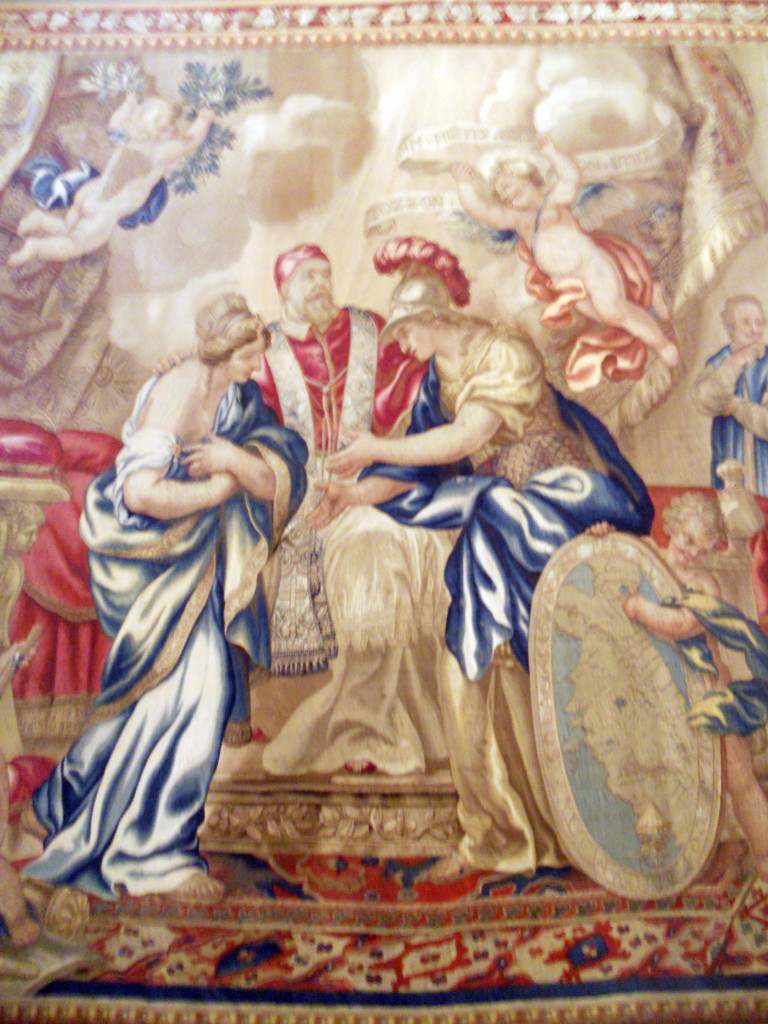 And finally, Urban VIII defends Rome from Famine and Plague by getting help from St. Peter, St. Paul, Athena, and St. Sebastian. Well done, your Holiness! 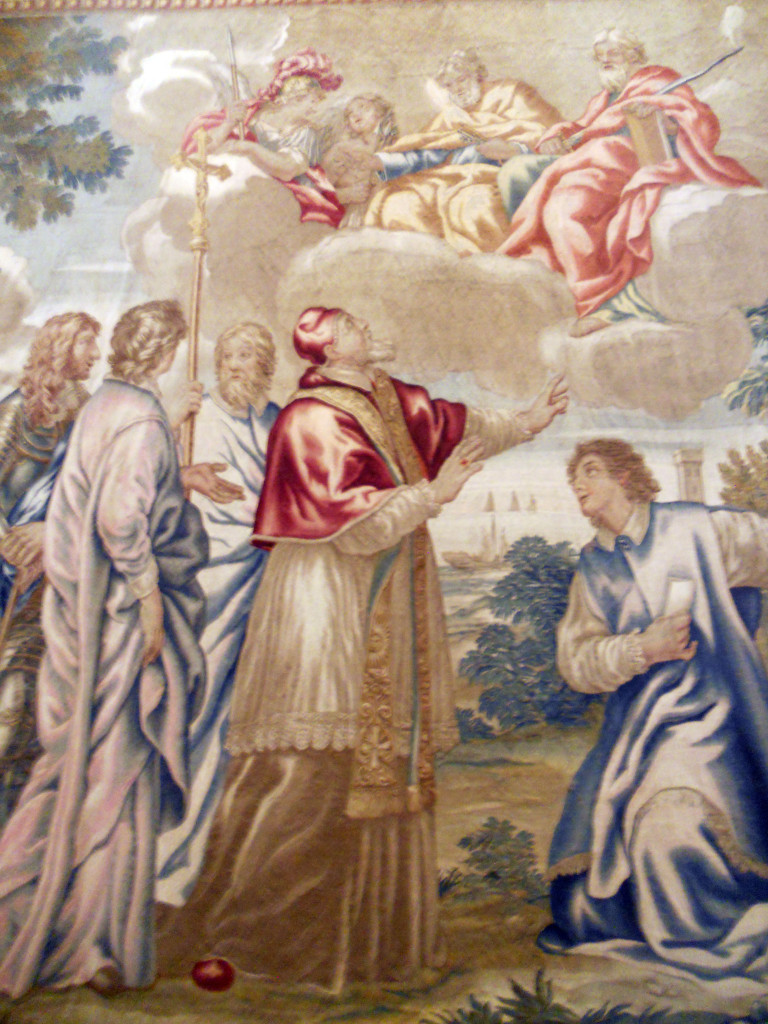 How about that for the exciting life of a late Renaissance pope? You get to hang out with lots of allegorical figures, and vaguely pagan deities as well as saints,  and everyone around you is always gesturing gracefully! No matter they fought so hard for the papal tiara. Also, no bankers or moneylenders or interest repayment to be found!

More seriously, another century’s propaganda rarely makes it into our canon of what art is worth reproducing, teaching and discussing, but I often find this kind of artifact much more historically informative than most: we can learn details of clothing, spaces and items like how papers are folded, or what voting slips looked like. We can learn which acts a political figure wanted to be remembered for, what seemed important at the time, so different from what we remember. A tapestry of him canonizing St. Ignatius of Loyola would certainly be popular now, but in his day people cared more about immediate military matters, and he had no way to predict how important St. Ignatius would eventually become.  Pieces like this are also a good way to remind ourselves that the Renaissance art we usually see on calendars and cell phone cases isn’t representative, it’s our own curated selection of that tiny venn diagram intersection of art that fits the tastes of BOTH then AND now.  And a good reminder that we should always attend graduation ceremonies, since you never know when Angels and Muses might descend from Heaven to attend.

Now, back to the Page Proofs!