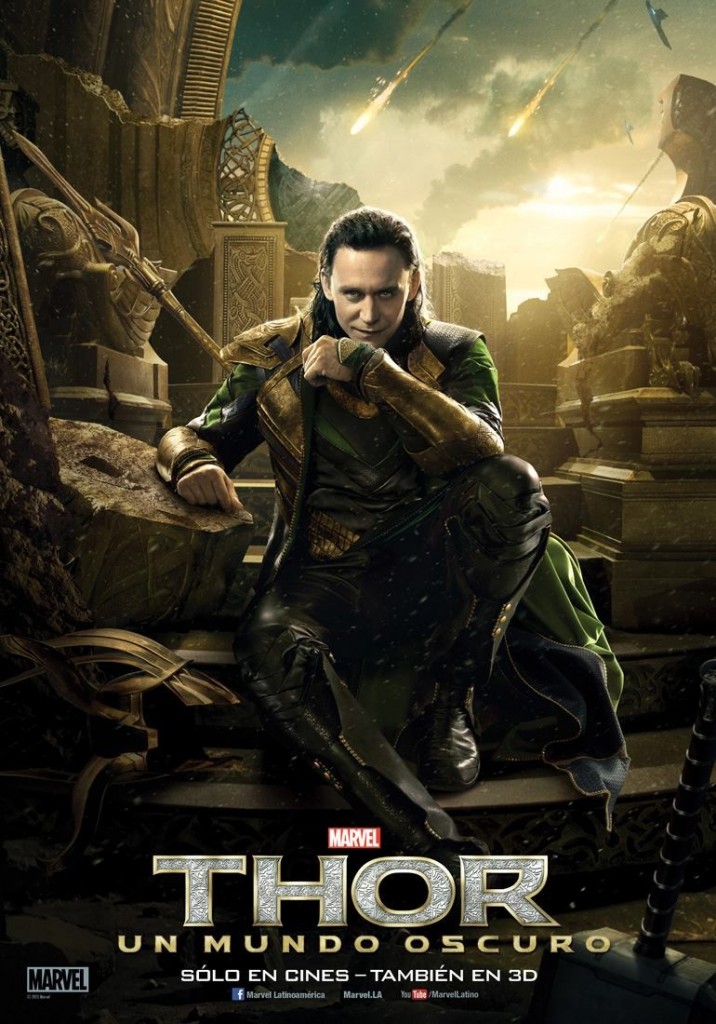 The new Marvel movie “Thor: the Dark World” opens in just a few days, so for those who have been following my “unbiased” review series (and for those interested in starting) here is a brief refresher on the “real” plot of the Marvel movies.

Alternately, you can read my full-length analyses of the earlier films: Thor, Avengers,  and Iron Man III.

(And before I receive any more comments or e-mails attempting to correct my “mistakes”: this series consists of tongue-in-cheek, in-character reviews of these films, intended for fun and to add extra zest to watching.  Please relax and enjoy my reviews it in that spirit.)

We will begin, as Aristotle would recommend, with some syllogisms:

Hereby we arrive at the single guiding principle which must inform our interpretation of the films: Loki’s activities so far were, in fact, a brilliant plan which succeeded, cunningly disguised as a terrible plan which failed.

Loki’s activities in the first film were a tour-de-force of misdirection, designed to secure and confuse his enemies about his true motives and lower their guard against him so he could freely put the mature stage of his plan into action.  The gods (doubtless influenced by Loki’s good advice) had put all Asgard’s transportation eggs in one basket, creating only one means of interstellar travel, Bifrost, the Rainbow Bridge aka. giant conspicuous vulnerable zappy teleporter gizmo. Having first developed his own original and untraceable method for moving between planets (Pleasant exercise for an oft-bored brain), the next necessary step was to destroy Bifrost, securing a monopoly on faster-than-light travel and stranding the others in Asgard (or making them waste staggering amounts of power to escape, and run around like idiots in the meantime).  The fake plan with which he camouflaged this goal was not even quite a plan, more a feigned temper tantrum.

Having trapped Thor on Earth and incapacitated Odin, he took charge of Asgard (side perk: getting to boss everyone around for  bit = superfun!). He then pretended to discover the (bloody obvious) secret fact that he was actually Jotun-born (Duh! What other race could produce such cold and glittering genius?), and to flip out and try to overcome this shameful (ha!) background and prove his loyalty (ha!) to Odin by exterminating the rest of the Jotun race.  And by pure, natural, utterly serendipitous coincidence, the most efficient way to do that was to repurpose Bifrost into a super-destructo-laser (Didn’t realize it could do that?  That’s what you all get for spending your time drinking and skull-splitting, while only a certain someone read all the schematics).  Thus when Thor returned, he destroyed Bifrost (such a pity), and was so convinced by the flipping-out-traumataized-oh-woe-is-me-I-was-adopted little brother lie that he tried to “save” Loki despite everything, but instead Loki fell “helpless” into the void which, of course, he had no means of navigating (Aaaaah, the sweetness of success).  Securing interstellar transit monopoly without anyone realizing that was what you were after: 12,304 hours of scheming and a few bruises; leaving Thor and Odin with a giant guilt trip: priceless. 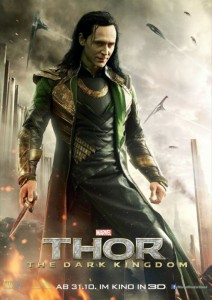 The Asgardians are now safely out of the way, and the overture can give way to the opening act.

In this camouflage plan, Loki makes a deal with random aliens in which he promises to deliver the Mighty Macguffin (currently possessed by S.H.I.E.L.D.) which will somehow let these aliens conquer the entire universe, and in return he gets the (puny) Earth (desirable for some reason?) while they get the entire rest of everything (go on, take it, I’ll pe peeerfectly happy just sitting here on this rock playing king of the humans…).  And to accomplish this he takes the following steps: (A) get captured by S.H.I.E.L.D., (B) hang around  in a cell for a while goading the Avengers, (C) escape making no attempt whatsoever to kill any of the Avengers who could’ve been easily killed and taking no advantage of his access to the secure inner workings of S.H.I.E.L.D. HQ, (D) help the aliens smash New York City for no particular reason (Loki smash?), (D) hang out in Tony Stark’s incredibly high-tech house for a while also for no particular reason (Loki dawdle?), and it is during this last step that he totally lets his guard down and gets captured by the Avengers despite numerous opportunities to escape (invisibility… teleportation… shapeshifting… alien allies… stairs…).  And everything else, particularly the bit where he revealed the existence of extraterrestrial life incontrovertibly to the entire human race, was totally accidental (Oopsies… was that me?).  Truly this is a cover-plan which only an idiot would believe.  Happily most of the Avengers are idiots, and of the exceptions, Banner has rather a lot on his mind, and Stark… now Stark is a toy worth playing with…

The true goals, of course, were to manipulate the Avengers, push Earth toward an interstellar war, and to wind up exactly where Loki wanted to wind up, back in Asgard close to Odin’s treasure trove of Cosmic Macguffins which make S.H.I.E.L.D.’s Mighty Macguffin look like a cracker jack prize, and Mjolnir look like the dinky rubber mallet which, in the grander scheme of things, it always has been, and always will be (Kids will cling to their toys…). And in the comfort of an Asgardian cell from which a well-prepared genius can effortlessly escape/project/whisper to agents/etc., we await the delectable invasion, at which point Loki will be freed by the Asgardians who are not quite stupid enough to forget the scintillating brain which really is their only possible salvation.  And in the chaos of that invasion, and with the Cosmic Macguffins in easy reach, the true  the plan will begin, at last, to turn…

I want to bring our attention back for a moment, to the detail that Loki very directly and very intentionally revealed the existence of aliens to the human race.  This is a truth the “good guys” at S.H.I.E.L.D. had been concealing for how long now?!  Hello, human race!  You’re not alone!  First contact!  What you’ve all been searching for, for so long!  Oh, and if the cosmic playground is a little rougher than you might’ve hoped, that’s only good for you.  Adds zest.  In fact, opening Earth’s interstellar relations with that tiny first foray in Manhattan may have been the kindest first contact he could offer Earth, since it’ll make the planet and its people prepare themselves for dealing with the idiotic stellar empires that are out there without dooming them to conquest-at-first-idiotic-diplomatic-snafu.  I mean, Galactus is out there, and Celestials, and the star-eating Phoenix entity.  A few space monsters in Manhattan is the cosmic equivalent of a light punch on the shoulder along with your “Hello.”  Frankly it’s Loki’s turn to stand before the human race and say “You’re welcome.”  But enough of that tangent… we have bigger fish to fry than Earth…

A full-scale alien invasion of the Earth, not some petty giant bugs squishing Manhattan, is a tricky thing to achieve, particularly with the most likely perpetrators, the Kree and Skrulls, locked in their eternal entertaining but rather monotonous war (Been there, manipulated that…).  Earth must be made to seem to be at just the right level of power, powerful enough to be a worthy target and to require a full invasion (delicious…) and not just a disappointing expeditionary force (bored now…).  But it can’t seem so powerful as to make the aliens bring genuinely overwhelming forces, since those might be too hot to handle while also juggling one’s usual thousand other balls, and might result in the accidental breaking of a few favorite toys.  Hence the necessity of carefully manipulating the Avengers so as to put just the right face forward, inviting just the right sized alien force.  And hence securing time alone in S.H.I.E.L.D. HQ and, later, in Tony Stark’s house, to tap their security systems and technology and gain complete mastery of Earth’s defenses, so one is prepared to shape the Earth reaction, and consequent conflict, to precisely the scale one wishes (…but the third bowl of glorious carnage was juuust riiight…).

Perhaps the most fun, if not the most critical, details which, thanks to Loki’s elegant subtlety, many viewers seem to have missed: Loki had a mind-control wand.  It let him turn people into his minions.  He hit Tony Stark with it.  For no explicable reason it “seemed” that Tony Stark was completely immune (Yes, tell yourselves it’s ’cause of the mechanical heart thing… that’s totally plausible…).  Stark was, of course, in his own high-tech house with his Iron Man armor nearby, meaning he and Loki were under surveillance the entire time.  If you were Loki and mind-controlled-loyal-to-Loki Tony Stark (note, Stark and Loki, both smart dudes), would you have Stark kneel abjectly at Loki’s feet?  Or would you have him pretend he hadn’t been affected, so that no one in the Avengers would suspect that one of their own had been co-opted?

For further evidence that Tony Stark was and is still under Loki’s complete control, we have only to look to “Iron Man III”, a film which may seem like Loki isn’t in it at all.  Yet, when examined closely, it is clear that the entire film is  portrait of Stark’s internal transformation as his admittidly quite respectable mind (not a rival to Loki’s but respectable in a “clever puppy” kind of way) became gradually reconciled to his new servitude, and came around to accept and eventually embrace his new master.  An exceptional mind takes breaking in.  Thus, the film chronicles Stark’s conversion, from his initial trauma-like symptoms (the mind fighting to free itself… how cute..) to his concluding declaration that his former self was a “cocoon, and now I’m a changed man” (details in the Iron Man III review).  And in the midst of this, we saw the master himself visit Stark (lucky puppy…) in the guise of the implausibly wise and ingenious little boy “Harley”, confirming, for those of us who were anxious during the long wait fearing that poor Loki might be bored waiting in his necessary but annoying Asgardian prison, that our genius has means enough to project himself in mortal guise at will. At the end Loki showed his satisfaction with his new servant and played the kind master, teaching him how to finally repair his heart (It was clearly established that Stark couldn’t and then suddenly bing! he does? Good service is rewarded…) 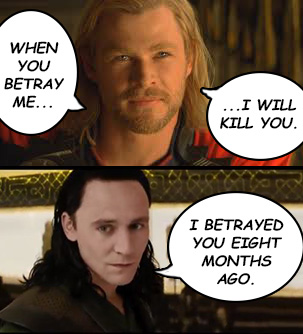 “Oh, Loki, pretty please save us from the alien invasion you yourself set up!”   The trailers have already revealed that much of the plot of the forthcoming film, but it will be interesting to see whether the film reveals that Loki set up the invasion, or whether Loki and the writers will conceal it from Thor and Odin throughout.  It may be that Loki’s connection with the invaders will remain subtext only, but he (and the writers) may succumb at last to the desire to let him gloat.  Thus the board is set, and we can expect the coming film to finally show the first stages of Loki’s true plan unfolding.  For maximum enjoyment, as you watch next week, try to keep these basic “truths” in mind:

And with these critical “truths” in mind, I hope you will all enjoy Marvel’s “Thor: the Dark World.”  Oh, and if the Thunderer or Odin asks, I’ve been quietly in my cell the whole time…

Click here to read the next installment of the series: the Thor 2 Gloat-a-Thon.

5 Responses to “Background of Marvel’s “Thor: the Dark World” (an unbiased recap)”