One day (soon! Soon I hope!) Ada will have time to make the more substantive posts here we’d all prefer, but for now I’m doing another brief update for her.

Some things come in fours — elements, doctors of the church, virtues, and this post.

First, fire, St Augustine, and fortitude: an intensive review of Too Like the Lightning by the erudite John Clute at Strange Horizons.

The moderately peculiar title may be intended to illuminate an inchoate suspicion that this tale may be all about how lightning precedes comeuppance (as always) but stops short of the thunder: Too Like the Lightning seems to be how two hundred years of an immensely complex and constantly negotiated peace are about to explode in an immense light show, leaving tatters, but does not tell us anything about the thump and consequence of landing. Its large loquacious cast—each member of which is significantly involved in maintaining a utopia responsible for the weal of ten billion souls—seems by the end of this volume to be running out of words: illustrated men and women about to char. You can almost feel the electricity.

This isn’t so much a review as a long essay. There have also been reviews on NPR, in the Chicago Tribune, and all over, as well as lots of interviews, including Scientific American. There are long lists of guest posts, interviews, and interesting reviews here.

Second water, St Gregory, and temperance: The Gelato Atlas has been updated to include not only Gelateria della Passera, the great new place Ada spotted from fifteen feet away when it wasn’t even open — so exciting to have good gelato in the Oltrarno! — but gelato other people have found in Finland, Rome, the USA and other exotic locations. 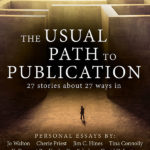 Third, air, St Ambrose, and justice: the book The Usual Path to Publication has just been released, and Ada has a piece in it about how Too Like the Lightning came to be published. This project arose out of a question at a convention when somebody asked a panel about “the usual path to publication” and the title reflects the answer that there isn’t one, because everyone’s experience is different. This makes it fascinating to read, and especially for aspiring writers. E-books are available from Book View Café: http://bookviewcafe.com/bookstore/book/the-usual-path-to-publication/ Amazon: http://amzn.com/1611386020, B&N: http://www.barnesandnoble.com/w/the-usual-path-to-publication-shannon-page/1123876756?ean=2940158509636 and for Kobo: https://store.kobobooks.com/en-us/ebook/the-usual-path-to-publication. It’s a physical book too, available where all good books are sold.  ( For example at Barnes & Noble and Amazon)  (Ada says: I’m extremely proud of this essay, one of my very best explorations of the art of the essay; highly recommended!) 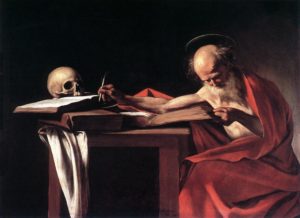 Fourth, earth, St Jerome, and patience (thank you for yours!) — after Readercon, Ada will be doing three events in bookstores in the north-eastern US. She’ll be reading from Too Like the Lightning, and I’ll be there too, reading from my new novel Necessity. We’ll also be discussing the books, answering questions, and signing books.

One Response to “Four Updates”