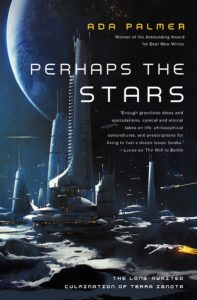 Q: Is Terra Ignota a utopia?

My ideal is when readers debate it being a utopia or not, which aspects of it do seem utopian and which seem bad or even dystopian. I intentionally made a mixture: it has a twenty hour workweek, a 150 year average lifespan, general prosperity, unprecedented political self-determination, you can live with your friends, there’s been peace for 300 years… and it has censorship, severe religious restrictions, weird silencing of gender, tension over land and rents, various political strife and prejudices, and other flaws. It’s wonderful how often a pair of friends will read the book and it will feel dystopian to one and utopian to the other. The silencing of religion makes some people say, “Yay! My super-religious parents would have to shut up and theocrats would be kept out of politics!” while the same makes others say, “Wait, I couldn’t have a passover dinner or a religious wedding without state supervision?!” Similarly the silencing of gender makes some readers feel like it would be ideal, making everyone stop gendering each other and use ‘they’ for all, while other readers feel like suppressing gender expression would be terrible and prevent them from feeling like themselves. It’s often the conversations between people for whom the world feels great or very-not-great that get richest, something I intended to help show how we need to think carefully about social change if we want to make a world that works for everyone. My real goal was to make a world which would feel to us as I think our present would feel to Diderot or Voltaire: some things are amazingly much better especially medicine and lifespan and daily tech; other things are weirdly confusing like (in the Enlightenment case) clothes that would seem to them as if we’re naked all the time, and social class working totally differently; other things are depressingly familiar like, for Voltaire especially, the campaigning Voltaire did against religious intolerance, torture, and anti-vaccination movements (he was a smallpox innoculation proponent and fought with antivaxxers in the 1700s!) the continuation of those problems still being issues would be weirdly depressing. That mixture is what I was going for: better in a lot of ways, worse in a few, in others just weird and confusing. Since that is really what the future is likely to be to us.

Q: Why does everyone (in Terra Ignota) assume there’s only one god?

So, short answer I don’t, and they don’t. This is a space where I think Mycroft’s own frequent discussions of Providence and a singular ‘Peer’ are overshadowing for you the details we learn about everyone else’s. Remember that Mycroft says in Seven Surrenders that he and Saladin were explicit atheists before his all-important encounter with you know who, and that while Mycroft has unitary ideas about Providence he also lenses them through Greek polytheism. Also recall that in the descriptions of sensayers especially in Too Like the Lightning it specifies that they consider atheism a belief system to be studied and discussed in all its pluralness and richness alongside the others, so sensayers are studying atheism among all the systems they study, and it’s just as diverse and complex, many different variant atheisms, than the others, all of which also enters the dialog with a sensayer. Having sensayer sessions isn’t about pushing people toward any particular belief, but facilitating people having an examined set of ideas, and making sure that everyone encounters many different systems, including several variant atheisms alongside a variety of theisms. Also important to note that, apart from the King of Spain and those close to JEDDM, the only other people whose beliefs we specifically hear about are the ones JEDDM encounters in the Saneer-Weeksbooth bash’house on pages 196-7 of Too Like the Lightning, one of whom is exposed as Catholic but the other as a believer in karma; belief in karma is definitely not the same thing as monotheism, and Carlyle tells Bridger on page 118 of Too Like the Lightning, “People have a lot of different ideas of different ways that reincarnation and karma might work,” and again most (though not all) belief systems that include reincarnation and/or karma are not monotheistic. So there’s a lot of complexity, but we see forefronted most the headspace our narrator is in, and the monotheistically-structured systems at Madame’s, precisely because they’re being *inappropriately* brought out in public while the properly-handled ones are silent, i.e. the many characters whose beliefs we don’t know because they’re correctly following the taboo. In other words, we are only seeing explicitly the religion that’s being done “wrong” by the metrics of the culture, and that one is dominated by Madame-influenced quasi-Catholic monotheism, but we see many many hints of the others in different corners of the text. Meanwhile, if you’re interested in a more complex dive into polytheism & religious pluralness in the Terra Ignota future, then I think you will enjoy Perhaps the Stars.