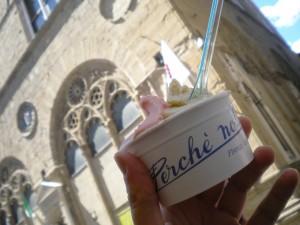 I was cheered recently by the juxtaposition of a pair of articles on my Italian news feed:

Both articles struck me, of course, as perfectly natural, since, as the ever-groaning gears of the Italian government, law and economy grow slower and more exhausted under austerity pressures, the only sane reaction is to relax and have a gelato. Gelato is an indispensable defensive measure in my experience of life in Italy, where truly obnoxious and stressful things do happen a lot, and you have to just accept that, 50% of the time, whatever you were trying to do just won’t happen.  The shop you spent an hour looking for is closed for no reason?  Relax.  Have a gelato.  The hotel you booked turns out not to exist?  (This DID happen to me, in Modena).  The paperwork you waited in line for 2 hours to file turns out to require something they never told you you didn’t have?  A pickpocket got you on the Rome 64 bus?  The museum you were looking forward to turns out to close early on the second Tuesday of each alternate month?  The romantic cobblestones broke your suitcase’s left wheel a half-mile from home?  These things happen all the time here, all the time, not to mention the constant frustrations of impossible-to-open doors and whimsical plumbing.  But even something as frustrating as a pickpocketing is much easier to deal with sensibly, and feels much less like the end of the world, if you relax and have a gelato.  I generally have a gelato the instant I get off the plane when I arrive in Italy, to give me the stamina necessary to brave the mobs around the baggage claim.   In fact, “Relax.  Have a gelato,” has become so ingrained in me as a default reaction to stress or failure that I habitually say it at home, to the great chagrin of my poor US-bound housemates, who would love to relax and have a gelato, were gelato achievable in the New World.

“But it is!” you say.  “They have gelato at the fancy grocery store by the mall.  Or at the import shop, or that pizzeria downtown, or in little Italy.”  They do.   There is gelato in the US, quite often these days, but, the important thing to note, is that it is (almost) always bad gelato, mere Hershey Bar ranked against artisanal truffles.  I have had good gelato in North America, in three locations, the Suite 88 gourmet chocolate shop in Montreal, the ChikaLicious Desert Bar in New York City (their cupcake bar across the street also has apple gelato of extraordinary quality), and, of all places, the underground cafeteria in the National Gallery of Art in Washington DC (here too get the apple flavor).  (Note: the organic gelato chain GROM also has branches in NYC, and I expect these too would have respectable gelato; my full thoughts on GROM another day.)  But for the most part, even in Italy-town subsections of US cities, the gelato is no better than one would find in an Italian train station.  Not what a gelato snob would call “good gelato,” and I am, I will comfortably admit, a true gelato snob.

What is the difference between good and bad gelato?  Good gelato is made from all natural ingredients, as pure and as few as possible, while bad gelato is made with artificial colors, flavors, preservatives, and coagulants.  Good fruit gelato is made directly from the fruit, bad from fruit extracts.  Really bad gelato is made from a powdered mix with no fresh ingredients at all.  Keep in mind that I do not say this as any kind of organic food purist.  I do often buy organic when I can, but I will never pretend that organic always tastes better, merely often.  I do not shrink from eating radioactive orange mac ‘n’ cheese out of a box when the craving hits me, and I heartily repented of my folly the one year I procured an organic turkey for Thanksgiving, and discovered to my horror and chastisement the true merits of the hormone-stuffed, brine-injected Butterball.  But gelato is very delicate, because it is so pure, involving so few ingredients.  You can taste the chemicals when there are chemicals.  You can taste the quality of the milk and fruit used, and if you frequent a place you can tell day by day how ripe the figs were, how in season the oranges.  Bad gelato has an inescapable tinge of candy-like artificial flavor.  It’s still a yummy substance, still worth eating, but it’s infinitely inferior to the pure article. There are, from what I have uncovered, four reasons for the scarcity of good gelato in the US.

Reinforcing scholarship: in a published poll, when asked which they would prefer, an ice-cream shop with (A) 25 flavors or one with (B) flavors that were all really good, most Americans chose (A), most Italians (B), and the northern sections of Europe mixed both choices.

(This, by the way, is, I suspect, why, among Rome’s elite gelato joints, the world-famous Giolitti is so popular with Americans and San Crispino with Europeans.  I recommend going to both, as each excels at some things the other does not.   More on these when I eventually review different gelato places (if wordpress will ever let me create the kind of index I want to use to do so, grumble, grumble.)

What is the difference between gelato and icecream?

I get this question a lot, and have two answers. In a technical sense, gelato is made with much less fat than ice-cream, in fact gelato is usually made with milk, not cream, but it has much more sugar, to compensate, since milk and sugar are the things that keep frozen concoctions soft and creamy.  A fruit gelato is, at its purest, a sorbet and contains no dairy whatsoever. In an aesthetic sense, however, gelato is much more about accentuating the substance from which it is made, whereas ice-cream is about combining flavors.  Strawberry ice-cream is an experience of the delightful comingling of strawberry juice with cream, producing a rich, strong, syrupy dairy experience, and reminding one pleasantly of strawberries and cream if one has ever had them together; strawberry gelato is the experience of eating a soft frozen strawberry, with no presence of dairy or commixture.  It is in the fruits and the nuts that this difference is most extreme.  A top quality chocolate gelato is quite similar to a top quality chocolate ice-cream, but a pistachio gelato is like eating a real pistachio, and a raspberry gelato will sometimes leave you with seeds between your teeth, which ice-cream never would.  Gelato, real gelato, doesn’t taste like it’s flavored with the thing, it tastes like it’s made of the thing. 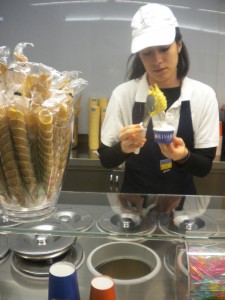 This last fact often makes it difficult for foreigners in Italy who are ordering gelato for the first time to choose flavors they will actually enjoy.   Pistachios and Pistacho Ice-Cream do not taste the same, and many people like one and not the other, and consequently make the wrong choice when trying to guess whether or not they’d like Pistachio Gelato.  I myself would run in terror from watermelon icecream, since I know from dumdums and artificial lemonade the horrors that watermelon flavor can inflict, but watermelon gelato (gelato di cocomero), which tastes like the entire fresh summer zest of a real watermelon distilled into each bite, is one of my great delights.  Conversely, many people like cherry syrup, in cocktails, on cakes, in Dr. Pepper, and these people are often wildly disappointed at the first bite of a cherry gelato, which bears no resemblance to the syrup, but simulates the experience of a, usually very acidic, sour cherry. Vanilla is the pinnacle of this cultural flavor misunderstanding.  Many Americans come to a gelateria wanting to try the equivalent of vanilla, and different people propose different equivalencies, but I have concluded, with careful study, that there is not an equivalent.  There are three equivalents.   This is because there are three different reasons people like vanilla ice-cream:

Thus “Gelato is Italian ice-cream,” remains one of the more misleading truths involved in Italian travel.  Gelato is indeed Italian ice-cream, but one cannot apply the same logic to it, and there is nothing like a 1:1 correspondence between which flavors one should order in a gelateria and an ice-cream parlor.  Unfortunately, this concept is difficult to pass along quickly.  You must remember, that I feel true emotional pain whenever I see a happy-looking person step up to a truly terrible gelato place when there’s a good one next door, and I very frequently strike up conversations with passing anglophone tourists which lead inevitably to my showing them a good gelateria.

At this point follows the test, and the suspense, when I start recommending flavors.  Will they listen?  Will they not?  Since often I’m recommending flavors they would never want in ice-cream.  I can generally convince people about one flavor by having the employees give them a spoonful to taste, but a lot of people just aren’t prepared to believe that “Yogurt and Mandarin Orange” or “Grapefruit and Sour Cherry” are winning combos.  “I’ll take Chocolate and Chocolate Chip.” My two recent favorite people I took to gelato places were both middle-aged American men, with wives in tow who refused on diet grounds to get gelato and thereafter ate a hunk of their husbands’.  One, when we arrived at Giolitti and I started discussing flavors, simply said: order for me, I trust you.  One dark chocolate-coated whipped cream-stuffed waffle cone with Champagne, Sour Cherry and Fleur de Sel Caramel Gelato later, he was a very happy man.  The other I took to Perche no…! (The sensibly named “Why not…!” gelateria which is the reason I live on the street  I live on here in Florence).  I recommended Yogurt, Strawberry Mousse and Mixed Berry (Frutti di Bosco).  He ordered Chocolate and Coffee.  After he tasted his, I let him taste my own cone.  He sighed and smiled.  “Well, you told me so.”

I am (if I can persuade WordPress to condescend to let me) about to create a new “Travel Tips” index section of Ex Urbe, in which I will gradually review restaurants, museums, hotels, coffee bars, and also provide general city-specific travel tips, things like where the public restrooms in Florence are hidden, and which are the better-tasting Roman water fountains.

I shall initiate it with an updated, web-friendly but also printable version of my little guide: How to Spot Good and Bad Gelato.  So vital is the skill that I, in fact, routinely distribute it as a handout to my students, and have often been thanked for it. I will also, in it, review specific preferred gelato places in major Italian cities, but sticking always to one principle: There Is No Best Gelateria.  There are bad gelaterias and good gelaterias, but in ranking the good ones against each other, I have never found one which beat all others in EVERY way.  Each has its points.  Perche no…! excels at sorbets, seasonal fruit flavors and mousses, Rivareno at smooth, creamy, antique flavors, GROM at its raw, organic feel, San Crispino at its meringue semifredo assortment and complex crema variations, Giolitti at its luxurious, elaborate cones and ocean of flavors, Vestri at its chocolate (Oh, its chocolate!), and each of these has three or four signature flavors which cannot be rivaled by the others.  I would never order frutti di bosco at Giolitti, nor fail to order it at Perche no…!; the converse for Caramel.  Both remain superb gelaterias. Remember, though: even bad gelato is still very, very yummy.  So, even if you don’t have access to the best, relax.  Have a gelato.

6 Responses to “Relax. Have a gelato.”