Drum roll please… time for the results of my Guess the Purse – Guess the Price challenge:

I often stroll through what I call the “thousand dollar purse” district, but even I stopped short the first time I spotted Purse #2 in the window.  Did they put in an accidental extra digit?  I was used to trying to guess from a distance whether any given purse cost 200 or 400 or 600, but nothing had quite prepared me for quintuple digits.

I had known fashion items in the ten grand range existed, so it wasn’t that which shocked me as much as my complete inability to tell why that particular purse cost ten times what its neighbor did.  Not only did I not know, but I couldn’t even begin to understand how I might know, yet at the same time I’m very aware that for people connected with the world of fashion, all it would take is a glance to tell.  It was a language barrier.  Like how an architect fluently interprets the vocabulary of a facade, a mechanic the sounds of an engine, or a medieval person can recognize saints at a glance.  A moment of feeling what illiteracy must be like.

Except at the same time, Reason rebels:  10,900 euros!  It’s a purse!  It’s a glorified sack!  I could make one in 20 minutes out of fabric or duct-tape, and the materials can’t possibly cost more than a few hundred.  Nice ones are nice, and I have some bags I’m very fond of, but… is it from the Moon?  Made of the hide of the last surviving wyvern?  Does it cure disease and repel undead?  Is it electronically synched with a satellite which will shoot pickpockets with lazers from space?  Was the leather bathed in the healing liquor which drips from the tomb of Saint Catherine of Alexandria ?  Is it perhaps like George Jetson’s suitcase, and folds out into a car?  I’d pay fifteen grand to never have to park again, but anything less…

Now, I don’t dislike fashion.  I quite enjoy looking at interesting clothes, studying costume history, making costumes, looking at shop windows, get excited over a particularly rich fabric or elegant coat tail, and I do pay serious attention to how I myself dress.  Fashion is a form of communication.  That’s how I primarily think of it: a social tool whose vocabulary of gender, class, situational, ethnic, geographic and subcultural cues let people communicate to others a kind of instant introduction and self-presentation.

When a dolphin meets another dolphin the first thing they do is urinate at each other, because by tasting each other’s urine in the water they can tell a lot about each other: age, gender, health, “Hello, I’m a juvenile female who just pigged out after a long journey without enough food.”  “Well, hello, I’m a middle-aged female local to this area and in heat; get stuffed.”  Clothing accomplishes the same, in balance with function, comfort and expense, of course.  On a bus or subway one doesn’t have to be Sherlock Holmes to know a lot about what class and type of professional or hobbyist most people are trying to seem.  I have a great respect for people who manage to use clothing to present themselves in ways which make them seem exciting and also give a good sense of who they are, and I strive to do so myself, and, in my case, maintain several different wardrobes (nerd, professional, historical, otaku) for presenting myself when I hop from hat to hat among my many spheres.

Like language, clothing as communication requires one to work within a set vocabulary.  As an astute economics textbook I read on the matter once pointed out, it might be that to some person encasing herself in a two-foot-diameter aluminum tube perfectly summarized her thoughts about herself, but if she walked to a room like that no one would be able to interpret it, so it would fail as communication.  Tweed jacket with leather elbow pads = professor, black with spikes = punk with all its countercultural associations; you can’t reverse or change that until the whole culture does, or no one will know what you mean.

But the fashion industry is something different: it changes constantly, every season, and it’s in its very changeability that it somehow communicates.  Bowtie = quirky/geeky/old-fashioned; wearing the latest fancy thing that’s currently in shop windows, whatever that may be = fashionista.  Thousand dollar purses do have a function, which is to communicate that this is a person of sufficient wealth and education and with the proper tastes to want one.

Returning to the familiar ground of the Renaissance, a blue garment or a lady with pearls woven through her hair is a declaration to passers-by of social class, and important for enabling the correct interaction between classes, and for making political and economic contacts and alliances.  When Alessandra Strozzi writes in her letters of having a daughter married wearing hundreds of florins worth of pearls sewn to her garment, the wedding procession was an invaluable advertisement of the family’s wealth and status and its connection to its neighbors, which played a significant role in the political interplay between Strozzi, Medici and other rival powerful families in the city.  This has a function, and even a wedding dress that cost as much as a house did have a function, and I respect that.

The problem comes in contemporary fashion from the fact that now one often has to be such a fashion-conscious person in order to interpret correctly, because to the untrained eye this year’s black Gucci purse looks exactly like last year’s black Gucci purse.  It’s a private dialect spoken only among a specific type of wealthy, trend-minded elite.

This season’s trends prove precisely why the private dialect of high fashion baffles me where other regions of fashion seem reasonable and, indeed, fun.  This season’s “look”, as one can’t help but notice on a stroll past Florence’s boutique windows, focuses on huge, rough, bulky, shaggy knitwear, mostly in brown, beige, gray or black, with accents in orange and teal.

Huge, shaggy knitwear of precisely the style that knitting hobbyists–a slice of society associated with old-fashioned handicrafts, tradition, nerd culture, and the shy prim crafts-doing girl type–produces.  There is no way that I can perceive to tell the difference between these 300 euro Ralph Lauren shawls and scarves and something one might request from a grandmother, or see growing longer panel by panel at a con.

Communication has failed.  Generally speaking,the presumed goal of a fashionable trendy dresser is to communicate to the layman that they’re generically nicely dressed and upper class or upper middle class, while to communicate to the expert that they’re savvy enough to know that boutique X rather than boutique Y is the correct space to spend a few hundred on sunglasses in 2011.  This season’s fashion accomplishes B but fails at A, since passing such an outfit in the street, my first thought would be “oh, that person knits or knows someone who does,” not, “ah, that person is a fashionable dresser.”  The vocabulary of fashion has left communication behind.  The dialect is now incomprehensible to the bulk of the country.

As for the extreme edges of fashion, and fashion advertising, which too often leaves you uncertain even what they’re selling, there one can only revel as in surrealist art.  Here are two choice specimens from the Milan train station billboards.  What am I supposed to want to buy? 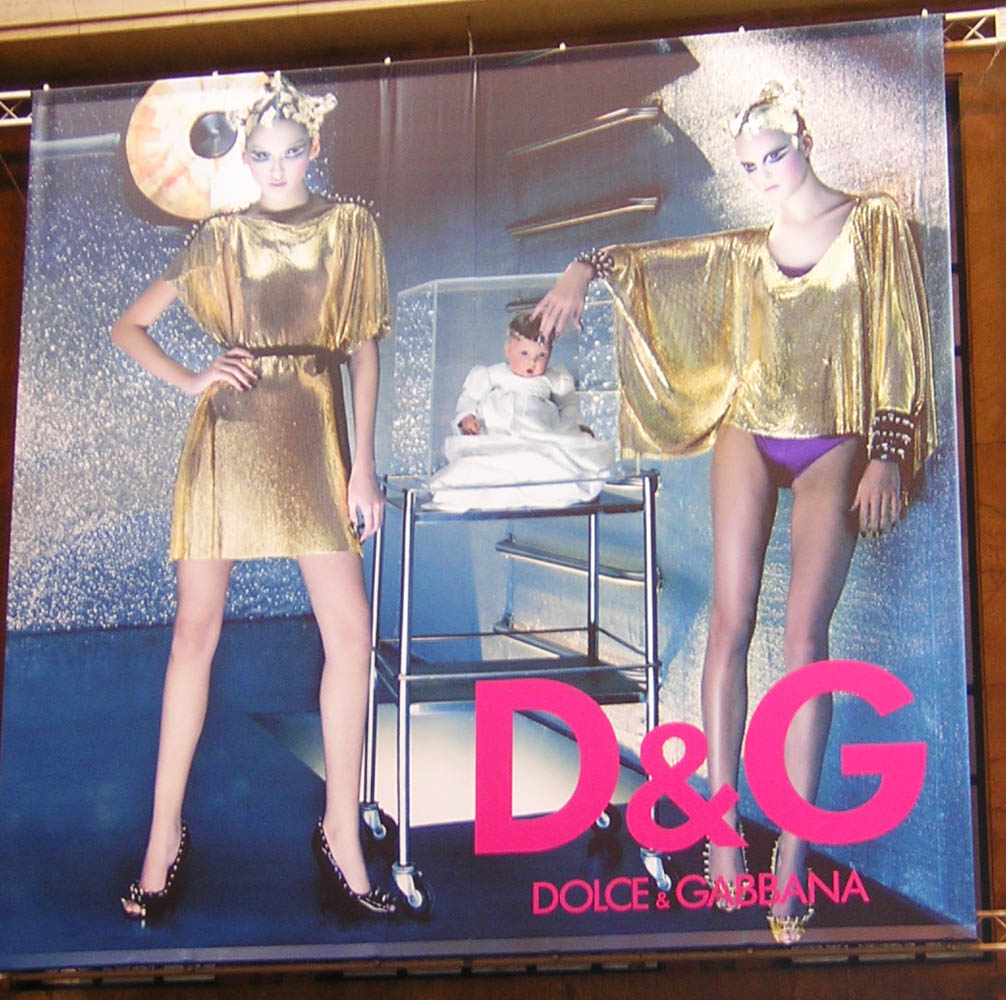 There is a district, just west of the center of Florence, which I refer to as the “Thousand Dollar Purse” district.

Here the truly extravagant end of European fashion displays itself for the delectation of the envious masses.

Here one can spend $500 on sunglasses, $1,000 on boots, and ooh and aah over purses whose merits elude my understanding.  Yet I know to that, to the stylish, the differences are as obvious as when I glance at an altarpiece and tell a Saint Sebastian from a Saint Jerome.  It is a language, and I do respect the effort it takes to achieve fluency.

In preparation for a more substantial post on the subject of thousand dollar purses, I present a simple guessing game. I challenge you to guess the prices of the three black purses shown below. I will not pull any cheap tricks and include a purse from the sensible end of town: all three of these purses cost over a thousand dollars.  My challenge: Guess the price of each!  To whoever gets closest I’ll give the prize of suggesting my next topic.  Or if you’re not confident enough in your knowledge of high fashion to guess the prices, simply guess which of the three purses do you think costs the most.

Now, the challenge!  Guess the price – guess the purse: 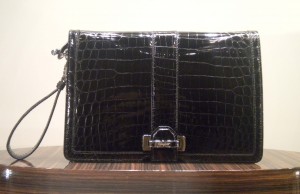 (No, there’s no shoulder strap, just the wrist loop, so it constantly occupies a hand.) 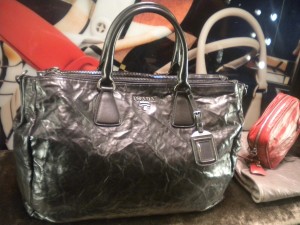