I mentioned a few weeks ago a busy week including a Joust.  The Joust in question was the Giostra della Stella (Joust of the Star), is held in Bagno a Ripoli, formerly its own town, now legally a Florentine suburb.  When it was annexed (20th century) in order to maintain civic identity it started having a reconstructed joust every autumn.  This is not a tourist event–indeed it is hard to reach by any means, and nearly 100% of the audience were locals–but a civic pride event, and competition.

The town of Bagno a Ripoli is divided into four historic quarters, the quarters of the Mill, the Horse, the Tower and the Standard-Bearer, each with its own crest and coat of arms, and horseman.  The four competitors, professionals brought in from out of town, joust for the honor of the four quarters, to loud and enthusiasm from the spectators.  Shields and pennants bearing the quarters’ arms decorate the field and street, and the townsfolk dress in t-shirts and colors to designate their sides.

The joust is held at night, in the dark, hence the lack of good photos.  One reason for the darkness is the temperature and blazing sun, but the other is that the afternoon is reserved for a different contest: an old-fashioned sports day competition between the quarters’ teams.

This I do have photos of, as the warring quarters compete at tug-of-war, sack races, a race with an egg balanced on a spoon, and, on the nearby roadside, running while pushing a wooden hoop along with a stick, and running while pushing a partner on a wooden cart.  The tug-of-war was by far the most dramatic competition, with much preparation and debate and measuring to the inch where each starting foot is placed, while each actual competition lasted only a few seconds before one side fell, grumbling, in the dust. 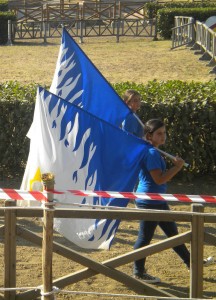 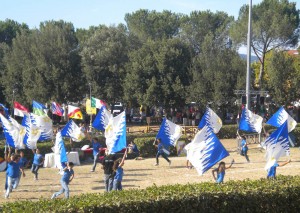 I wish we did this in MY middle school

The flag tossers were also extraordinary, with an exhibition by the junior trainee flag tossing team, and a stunning performance by the adult team with double flags, one in each hand, which were tossed and spun in mesmerizing close-quarters patterns and tossed from person to person in complex, interwoven dances.

I have no decent photos of the joust itself because this is a night joust, held by electric light in a charming field well after dinner, so crowds can enjoy the late summer outdoors without baking in the sun.  I can only describe, therefore, the stunning costume pageant which precedes it, in which at least a hundred participants in perfect sixteenth century costume parade along the street to take their seats in the reserved stands.  The thoroughness and variety of the costuming puts most Florentine pageants to shame.  Musicians in the town livery began the parade, and the town militia, and the Podesta of the town with his ministers following behind the city standard.  Monks and an abbot joined them, touch-bearers, peasants with baskets of harvest foods, and a portable maypole which skilled children circled even as they processed.  There were noble representatives of specific grand houses of Florence and its allies too, each group including lord, lady, clients, servants, even children in tiny doublets or toddlers’ bodices, all led by a standard bearer with the family crest, so a sharp eye might pick out a Strozzi and a Medici among the crowd.  The detail was exquisite, from the strings of pearls woven through the ladies’ hair to the heavy texture of the gentlemen’s trailing sleeves. Many of the lords’ and ladies’ costumes were recreations from specific portraits, and even the gems embroidered onto layered pleats were executed to perfection.  To perfect the display of civic pride, the part of the Podesta, in his long velvet, was played by the actual top official of the town, and several other leading magistrates participated as his entourage.

The Joust itself was a style I had never managed to see before myself.  I am, of course, serious about watching jousts, both from attending numerous Renn Fests and from calling Maryland home, whose state sport is still jousting (though in 2004, despite the noble efforts of many, this noble remnant of grander days was perniciously adulterated by the election of lacrosse as the state “team sport”).  I may not be so elite a jousting snob as I am a gelato snob, but I am picky, and this was excellent.

The “star joust” uses small, light horses, trained for speed, who race full tilt around a small looped race course while the rider attempts to capture a metal star with a hole in the center using–not a lance–but a sword.  The rider must make two loops in 30 seconds, making one attempt at a star each time, receiving points for each star captured, and in case of a tie in points, speed is the tie-breaker.  Three rounds of increasing difficulty are held, using stars with smaller and smaller center holes, and the later stars give more points.  So trained for speed are these slim horses that, unlike the heavy, docile animals used at American fairgrounds, these were spirited to the point of disobedience, balking from unfamiliar objects, bursting into short jolts of speed without instruction, and one knight needed five attempts to get the beast to take him close enough to his lady to receive her favor.

The display of athleticism, on the part of horse and rider, was gorgeous, and in the electric light the smooth backs and haunches of the horses rippled and shimmered like silk, especially on the pale gray one that looked like polished pewter.  One could see through the thin fur and taut skin the motion of the muscles, and, since the horses went one-by-one, the gallop was all startlingly quiet, not the thunder of hooves one generally hears with many horses racing, but a light percussion, barely audible except when the horse passed close.

Equally fascinating was the cheering, or rather the booing, of the crowd.  The math will tell you why.  In a town divided into four quarters with one rider representing each, three quarters of the audience are disappointed whenever one rider does well.  Thus, the booing will always be as loud if not much louder than the cheering, and however much praise may rain down from sympathetic slopes, the capture of a star always solicits a general moan.  Given the usual adrenalizing effect cheers have on an athlete, I do wonder what chill a string of gasps and curses instills.  This was ever so much more true of the rider in red and white representing the quarter of the Standard-Bearer, because, (as a kindly old local rumormonger explained) due to one of those sorts of dramatic falling out incidents that often destroys a school club or bowling team, that quarter did not have a team in the earlier day’s athletic contests, and had no team spirit.  Thus, when that rider succeeded, everyone, the whole crowd, booed, or condescended to recognize his skill with a spattering of disjointed, grudging applause.  In fact, it was this lest popular horseman who triumphed that evening, to the general satisfaction of… me?  No one else?  The rider cast in that role was, in fact, the most experienced, and this was his eighth victory at this particular joust, though a different rider was riding the horse which (with a different man on his back) won last year.

A true shadow, which very nearly thwarted the joust entirely, fell across the camp mid-way through, and incited a half hour of eerily legend-like suspense.  The sword broke.  Mid-way through, it got dinged or bent or something, and the announcer in his grand robes declared a halt.  Men in colorful livery scattered across the grounds checking equipment.  They didn’t have a spare.  There was only the one sword, and without it the jousters milled aimless in the courtyard, their horses becoming increasingly touchy and obstreperous as they milled the hedged waiting box.  It was at this point that it occurred to me that we were at a joust, and somebody lost the sword, and squires were off looking for one, and while Italy seemed an unlikely place for a boy to suddenly become King of England, this was still quite the circumstance.  In the end they turned to the costumed crowd, and asked all the gentlemen, the Medici, the Strozzi, the knights and guardsmen, to all bring their swords to the front so the officiators could select the one most physically similar to the lost official version.  Thus we confirm that it is vital for half the crowd to come to any joust in costume.  The sword replaced, the joust concluded with the victory of the very excellent knight-whom-no-one-liked, and fireworks.  And a long, awkward attempt to get a taxi home at midnight.