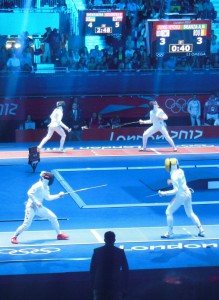 When in London, do as the Greeks do: go to the theater a lot, enjoy antique sculptures, and, if they’re on, check out the Olympics.  So, lest this corner of the Earth be untouched by Olympic fever, I must jump the queue a little bit to share my experience yesterday seeing the Women’s Épée team fencing matches.

The British Library is the most comfortable and convenient library I’ve ever used, and when research brings me here London never fails to be a delight.  Yes, the cruelty of the pound sterling makes everything twice as expensive as it should be, but one can see Shakespeare pretty-much every night for between £5 and £20, all sorts of other theater for remarkably sane last-minute prices, and even more wondrous things, like the British Museum and the Imperial War Museum, for free.  Despite the infamy of English cooking, London is saturated with fabulous ethnic restaurants, sure to delight even those who do not share my perverse love of English full breakfast and Cornish pasties (nostalgia-flavored in my case, since they’re all I could afford to eat in London when I was a grad student).   The layers of London’s architecture are my favorite part: every building on every street a couple centuries off from its neighbor, so Gothic arches flank neoclassical brick and shining modern glass.  Rome has layers too but not the modern ones, since everything in Rome is pretty much 19th century at the latest, so it doesn’t have the spectacular juxtaposition of battlements and space-age towers.  The greatest treasure, in my bibliophile opinion, is the little-discussed Treasure Room of the British Library itself, displaying the most prized possessions of one of the finest rare books libraries on Earth.  Now that is a library dedicated to serving the public. 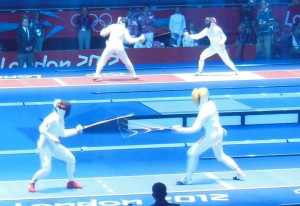 But London and libraries later – this post is about the Olympics!  I couldn’t not go, since my tight research schedule required me to be here while they were going on.  I do not follow sports, except their history to some extent.  In fact, I had not been to a sports game since my Dad took me to baseball as a kid as a mandatory part of my American cultural fluency.  But fencing I understand, and find interesting, and did myself for a little while.

The big difference for me between attending in person and watching on TV (other than the vitality which always differentiates live events from filmed) was the increased reality added by the absence of editing and post-production.  We receive our Olympic coverage saturated with commentary and, usually, trimmed to eliminate everything tedious or secondary.  The commentary (which live attendees can enjoy if we pay to use a wireless headset) helps with comprehension, especially of unfamiliar sports, but it also has the strange effect of making one artificially critical.  The voice-overs are usually made by experts, even retired Olympians, who spend a lot of their time pointing out the minute mistakes made by the competitors.  The result tends, in my experience, to make one dwell on the negative, sitting there thinking about how constantly people are messing up, and how far from perfect it all is.  Watching live, doing my own analysis with senses alone, I was able to ignore the “Look how tight her shoulders are!” or “Oh, she really flubbed that lunge, look at her weight too far to the side!” and concentrate on the more positive (and easily forgotten) fundamental: Dang, all these women are really great fencers!

I have long been annoyed by most Olympic (and other news coverage) voice overs, but it wasn’t until I saw the events without that I realized how thoroughly the commentators dictate how you’re supposed to feel about any given moment.  I appreciate that they’re designed to help the majority (including myself) who don’t know a lot about the sports, but information is usually coupled with opinion until it practically spells out: “Sit up in suspense here.”  “Tear up here.” “Frown disapprovingly here.” 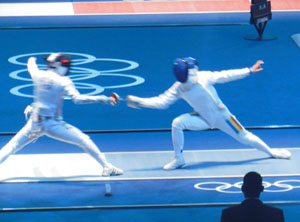 Épée is, I’m now quite confident, the most satisfying fencing style to watch, even if foil was my weapon when I fenced.   Épée bouts tend to last a long time, because (for those not familiar) the whole body is a target, whereas the other types of fencing have more limited targets.  Épée  fencers therefore have to be super cautious, because if you make a brilliant lunge but your opponent taps you on the toe or elbow, all is for naught.  It’s also easier to understand, because a hit is always a hit, whereas in other styles of fencing hits sometimes don’t count for convoluted reasons (off target, right of way rules) that make it hard to tell from a spectator’s distance what’s going on.  This one could enjoy without expertise, and it was even easy to tell the difference between a simple and an impressive bit of swordplay after only a few bouts.  Most conspicuous, though, was how constantly bouncy the fencers’ stances were.  We all know fencers need to keep constantly light on their feet, on the edge of springing, so they can dodge and lunge, but, since I hadn’t fenced or watched fencing in some years, the feigned, dance-like springiness of stage and movie fencing had come to dominate my mental image of the fencer’s stance.  As my amateur videos below demonstrate, the fencers’ legs bounce and jiggle constantly, as if their joints are made of some kind of jelly or rubber that’s constantly recoiling from the vibrations of an earthquake.  (If video doesn’t show, refresh.)

(By the way, I don’t know of any rules against posting amateur Olympic video for non-commercial use and they didn’t warn us about it, but if there are rules someone let me know.) 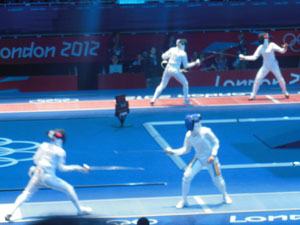 I was more interested originally in seeing the earlier rounds, the quarterfinals and semifinals with all eight teams competing, because that meant more fencing for my buck, and my goal was to study how bodies moved, and how crowds responded, in person at an Olympic fencing event.  In the end, though, even though the day’s quarterfinals did let me see two or even four simultaneous matches for nearly six solid hours, the evening’s two final matches, one to determine bronze & 4th, the other gold and silver, were more exciting.  There were three reasons for this: two cosmetic, one real.

Cosmetic reason #1: the crowd was louder and more enthusiastic.  More seats were filled (though some were still empty, despite the fact that these events were both sold out according to the website), and the crowd cheered more and more loudly.  Cosmetic reason #2: the whole presentation was more dramatic, with the fencers brought in to parade on the main stage and be hailed by name instead of having their names called out as they entered through the side aisles, and with dramatic music (usually choral chanting in a minor key with hartbeat-like drums) played between every bout.  This gave the event much more energy, even though there was a lot more going on at the first event.  In some ways it is strange that the crowd was more excited at the finals, since there were eight teams in the beginning so many more of those attending had home teams to root for than in the final, in which the mainly European audience had few opinions on South Korea vs. China, but the presentation and the mass of people sure got the volume up. 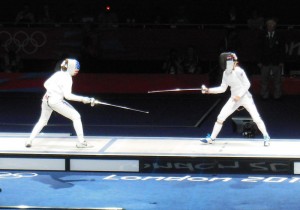 The real reason the second bout was more enjoyable was that the teams were more evenly matched.  Each clash of teams involves nine consecutive matches, and the hits are added together, with the winning team being that which reaches 45 points or is ahead when time runs out.  Consequently it’s easy for one team to get way ahead, and have an unassailable 10 or 15 point lead before the midpoint of a match, after which the fencing is still fun to watch, but suspense is gone.  This happened in most of the early matches, but the later matches were much closer, with long periods of tight scores, one team pulling ahead then the other catching up and overtaking in fierce alternation.

The big surprises in this event were the unexpected defeat of the Romanian favorites, who were knocked out in the first round finishing sixth, and the unexpected success of the American team, who started so far out of the commentators’ notice that, not only were they not mentioned in the review of which teams we were to keep our eyes on, but when the host went through the crowd asking people to cheer in turn for the countries they were rooting for, he skipped the USA entirely.  Nonetheless the US made it to the Bronze vs. 4th place match against Russia, which was incredibly tense and close, with the US behind through most of the first 3/4, then pulling up to a tie, and for the last four rounds the teams were neck and neck, pulling ahead alternately only to fall back again.  They ended tied, so the match was settled by a single touch instant death bonus match, and the US achieved victory by a hair.

The Gold v. Silver match between China and Korea was less dramatic because China pulled well ahead in the second half.  There the interesting part was the crowd reactions, as the mainly European crowd became comparatively equivalent in their team support, everyone clapping equally for both sides, while small pockets of Chinese and Koreans in the crowd outed themselves with deafening bellows and chants whose meaning we could only vaguely guess at.  Not that sports chants set a high bar for grammatical or intellectual complexity even when they are in familiar languages. 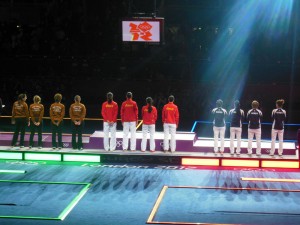 As for the medal ceremony, seeing it from behind and from a distance was less thrilling than the TV versions that zoom in on faces.  I did enjoy watching the apparently logistically convoluted process of assembling the thing the athletes stand on during the ceremony (there was apparently some debate about which bit went where).  The most emotional moment for me was when the honor guard entered carrying the medalists’ nations’ flags, not a moment TV often lingers on, but the strict honors paid by the host country to the flags and the ideals of international brotherhood they represent was quite moving.

One more general Olympic note: the crowds were very mild.  London has poured an amount of effort into logistics, and despite the fear, and rumors, and posters on the subway warning of crowding with a cartoon of a dressage horse on an escalator, the subway was clear, the street traffic reasonable, the shops well stocked, and everything smooth.   London-resident friends report that if anything there is less crowding than normal for the time of year, because so many people are staying away for fear of the games.  Shops and theaters especially are apparently losing business, and offering consequent specials.  The Olympic park and all the venues are marvels of architecture, practicality and urban planning, and real live people on the street are just as excited as the talking heads about what a long-term boon it will be for East London.  So, go UK Olympic organizers!  Except for the tickets being nightmarishly difficult to get (a saga for another day), they have done extraordinarily.

Irrelevantly, somehow in 2008 I missed the fact that they made this awesome animated Journey to the West themed video ad for the Beijing Olympics.  It’s fantastic, really, probably my favorite commercial since Astro Boy and the Buddhist spirit of life and reincarnation (the Phoenix) told me I had to buy a Toyota Prius.

3 Responses to “When in London, do as the Greeks do.”