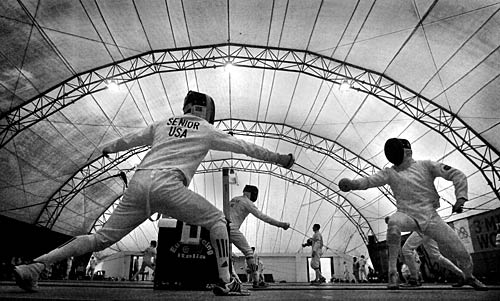 Since our chance to watch it is this weekend, I can’t resist a quick plug for what I consider easily the most exciting Summer Olympic sport, despite being generally regarded as the most obscure: the Modern Pentathlon.  I know most mixed events are obscure and, at first glance, somewhat arbitrary, but when you learn the idea behind the Pentathlon, even the most hardcore non-sports-fan has to get somewhat excited.

The ancient Pentathlon was a set of events intended to showcase the skills of the ideal soldier.  It featured five competitions, each relevant in battle: a foot race, wrestling, long jump, javelin and discus throw.  (If you doubt the relevance of discus throwing in war, check how many people in the Iliad die from having rocks thrown at them.)  Early on in the modern revival Olympics they tried the same thing, but Olympic founder Pierre de Coubertin got the idea to create a new pentathlon to showcase the skills of the ideal modern soldier at the dawn of the 20th century.

The competition is a test of the skills required when escaping from behind enemy lines after being captured.  The competitors must fence (staving off the guards), shoot with a pistol (stolen from the enemy), swim (crossing a river), ride jumping over barriers on an unfamiliar horse (again stolen from the enemy), and run to a finish line (representing the safe border of friendly territory).  The riding event on a horse the competitor has never met before is a particularly tricky variant on show jumping.  The swim, fencing and riding are held earlier in the day, and successes or failures there are translated into points which turn translate to head starts or handicaps in the foot race, at which the first to the finish line is victor.  In recent versions, the shooting has been done during the run itself, so the athlete (i.e. escapee) must stop mid-run at maximum exertion and then shoot a target (i.e. enemy assailant).  The faster a competitor can land the required shots accurately on the target, the sooner he or she can return to the all-important run.  Like in the biathlon (whose combo of skiing and shooting represents northern European military exercises), it takes a special kind of physical mastery to keep the racing heart, shaking and quick breathing from the run from unsteadying the hand.

The Men’s Pentathlon is this Saturday (August 11) and the Women’s Sunday (August 12), and it will be shown (like everything else) in part on NBC. There will also be a full, live webcast on www.pentathlon.org   I have struggled in vain to get tickets, but intend to enjoy the live stream myself, and watch our brave and dashing officers race for that border.  (You can learn more on the surprisingly helpful webpage of one of USA’s promising young Pentathletes, Suzanne Stettitinus.)

4 Responses to “Modern Pentathlon: Quick plug for an obscure but awesome sport.”