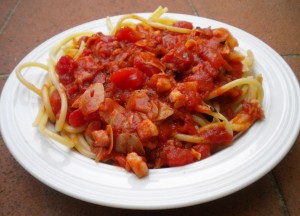 One of my great life goals has been a delicious pasta sauce that can be made in the time between putting the pasta in the water and draining it, and that has minimal clean-up and non-perishable ingredients, so you can have them constantly on-hand.  I have succeeded.  The winning sauce is a variant on Amatriciana, a rich, tomato based red sauce with onion and pancetta, and with my modifications, it can be prepared in five minutes.

A sauce that can be made between putting the water on and draining it is relatively easy to achieve, but when one has just come home from work, haggard and voracious, the six-to-ten minutes it takes water to boil are invaluable.  They can be used for e-mail, changing out of work clothes, asking family about their days, doting on pets, or the ever-popular staring into space while the brain-drive defragments.  The effort to quality ratio was also a dominant factor in the development of this recipe.  While a fresh red sauce is better than most jar sauces, it’s generally only a bit better, and the small difference makes the effort of making something from scratch and cleaning it up hard to justify.  Thus my requirement was a sauce that can be created in 5 minutes, which generates minimal clean-up, and tastes considerably better than jar sauce.

Two great and widely-applicable cheats enable my nearly-instant Amatriciana, which are applicable in many contexts and have exponentially accelerated my ability to prepare any Italian dish and many others:

Even not knowing what the edible object is, I can still prescribe a technique that works 75% or the time:  In a large pan, simmer finely diced onion in delicious oil and/or liquid (olive oil & white wine, sesame oil and/or mirin & soy, take your pick), add some salt and basic seasoning (garlic, ginger, spicy red pepper, again take your pick), chop up edible object(s), add to onion mixture along with any chopped secondary food objects you may choose to contrast it, fry until cooked.  This is universal and easy, but not quite easy enough for a five-minute sauce, since it involves (A) having a perishable fresh onion on hand, (B) peeling and chopping said onion, (C) enduring onion vapors, (D) waiting for the onion to cook, (E) cleaning up peels, stems, splinters of onion, cutting board.

Dried onion solves all five problems.  Heat half a cup or so of liquid—any liquid—in a pan, sprinkle in a tablespoon or two of dried shredded onion, simmer for 20 seconds and the onion will reconstitute, and begin to cook and caramelize like fresh onion.  I use white wine (since here cheap white cooking wine is literally cheaper than water) but olive oil works, mead works, apple juice or cider works, and in a pinch water works.  It can’t substitute for fresh onion in a salad or a salsa, but for any of those myriad recipes, from marinara sauce to curry, which involve infusing onion into a mixture without having chunks of onion as an important ingredient, it solves infinite problems.  The primary drawbacks are (A) finding dried shredded onion, which is only carried at larger or specialty groceries, and (B) cooking it long enough for the pieces to get soft, or else they are detectably a little chewy in the final mixture, but the latter is rarely detectible and frankly doesn’t bother me when it is, and the former is countered by the fact that dried onion keeps indefinitely, so once you’ve found some you can buy a hogshead of it and have tasty foods for many moons.  Suddenly a whole world of 30 minute recipes become 20 minute recipes, and 20 minute recipes enter the realm of our between-pasta-stages ideal.

Likely you too have enjoyed the mild savor of a whole garlic clove roasted until it becomes soft and sweet.  As a pizza topping or accent in a sauce.  Problem: it takes a while.  Solution: a garlic clove which has been frozen and thawed again cooks to softness much faster, in a matter of five minutes instead of up to twenty.  These days, jars of pre-peeled garlic can be bought in many grocery stores.  Simply throw one in the freezer and, as you start your sauce, toss a handful of frozen whole cloves into the pan to simmer.  Five to seven minutes and they’ll be soft, sweet and completely done. 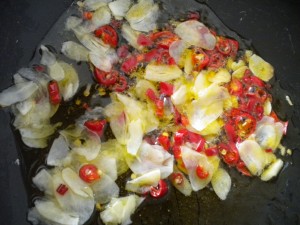 MY APARTMENT HAS NO FREEZER.  Consequently certain aspects of the culinary world are cut off, among them frozen garlic.  I must thus resort to a slightly-less-convenient but even more delicious alternative enabled by the Leifheit brand Comfortline Gourmet cutter.  It is a hand-held slicer which in a matter of seconds transforms peeled fresh garlic cloves into perfect paper-thin slices that look exactly like rose petals, and cook with incredible speed to perfect tenderness.

I ran across this particular device when I went to the nearest hardware and kitchen store to acquire a good cheese grater.  I found the grater of my desiring—the round kind with the crank which grates with amazing speed and minimal bloodshed—and it was shelved in the shop clearly paired with this little garlic slicer, with the unspoken motto, “If you’re serious enough to want this cheese grater, you want this garlic slicer.”  And oooh was it right.  Now I do have to go to the bother of peeling my own garlic (4-8 seconds per clove, oh noes!) but when done, the petal-like slices cook in approximately one minute, and are a lovely addition to, well, everything. 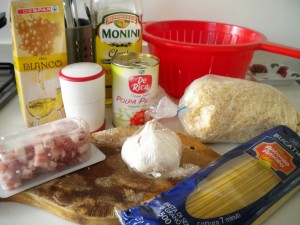 Now, Amatriciana (Ah-mah-tree-chee-ah-nah) is the winner, an extremely rich and mildly spicy red sauce using tomato, bacon or cured ham of some sort, and, in the Roman version, lots of onion.  (My next goal is a vegetarian version, but the meat really does power the sauce, so every veggie variant I’ve tried has been not enough better than jar sauce to justify the difference.  Sorry, Aang.)

Amatrice is a town on Lazio, near Rome.  The official website of the Comune of Amatrice explains the history of Pasta Amatriciana, and is propagandistically insistent that the true beast can only be prepared using Amatrice guanciale, a special cut of salted bacon-like cured meat made only in Amatrice, and pecorino cheese also from Amatrice.  I will, out of respect for the town, post their official recipe for real Amatriciana in my recipe section, and publically confess that, yes, it is better, but (much like the difference between the pizzeria O Vesuvio next to my apartment and the pizzeria Le Campane 20 minutes across town which has less charcoal edge to the crust) it is not enough better to justify making the effort very often.  Amatriciana is usually served on the indomitable Bucatini (which for its floppiness merits being nicknamed “Jackson Pollock pasta” or “Finger-painting pasta”) but is also good on any noodle. 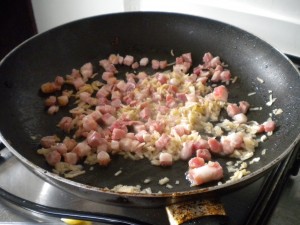 An efficient, printable version of my “Cheater’s Amatriciana,” with quantities and all that busywork, is posted in the Recipes & Cooking section above.  Here, I wanted instead to share the sequence, since Amatriciana is best summarized as: “Fill your pan with yummy.  Now add tomato.  Done.”   Thus, I narrate the process here only for the sake of those who enjoy the vicarious pleasure of food voyeurism:

Add diced Pancetta to the pan, or failing that thick-cut bacon or, in Amatrice, guanciale.  Simmer until the fat softens and savory, salty liquid starts to pool in the bottom of the pan.  Throw in some whole frozen garlic cloves at this stage for more garlic savor. 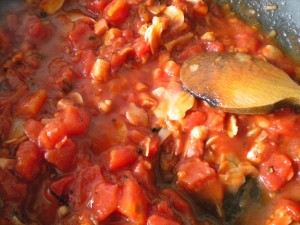 Add a half-cup or so of white wine, which at this point should flare and sizzle in the pan and lose its alcohol within a few seconds.  Use it to re-hydrate the onion, which quickly becomes golden and sweet.  Add petals of fresh garlic at this point for even more garlicness!