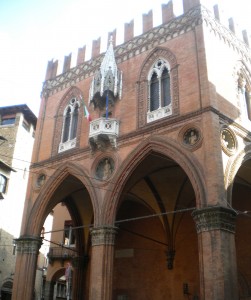 I made a day trip to Bologna, our neighbor to the north, home of one of the greatest old universities, world-renowned in the Renaissance for its medical school.  A friend who studied professors’ families and households had invited me to join her on a boat tour of the medieval underground canals which were constructed to allow for easy transportation of goods throughout the city.  The tour, alas, was canceled due to insufficient water for the boats to move, but being stranded in Bologna for an afternoon with an expert on its history is no large hardship.

We visited a complex of seven small medieval churches, built successively at different times and gradually connected together into a chimerical complex in which one steps out of a long Gothic nave only to step into an octagonal Byzantine one, then on into a colorful brick cloister that might have been built in Venice, and so on, style by style room by room.  The cathedral is entirely baroque, and since Bologna was never quite so affluent as Florence, especially in the Baroque period, a masterpiece in painted fake marble, painted fake architecture, even painted fake porphyry, but with a few remnants of its displaced Medieval predecessor lurking in corners here and there.

We also visited some exceptionally expressive wooden and terracotta sculptures – both media underrepresented in Florence’s great galleries of stone and bronze, and took a meandering walking tour of the city’s long medieval streets and Renaissance facades (much to the chagrin of my friend’s daughter whose panino we were commissioned to deliver at 1 and didn’t place in her hands until around 4).  Many of the raised porches survive on massive dark medieval wooden beams, something almost absent in Florence which neoclassicized everything it could touch.  Again terracotta is a great component of these old facades, which families constructed to impress on passers-by their wealth and distinction, and not only saints but grotesques and even character portraits are common accents between arches and columns.  Again the touch of the great northern neighbor Venice is conspicuous in the rich pinks and peaches of these narrow roads, and in the window trimmings, elaborate and white like wedding cakes, as well as in the occasional winged lion.

I was delighted to be reminded that Saint Dominic is buried in Bologna, the founder of the Dominican order with its great tradition of scholarship and pursuing truth, for which I have particular affection.  Bad timing relative to evening mass kept my pilgrimage brief this time, but I must return, both to examine the great saint’s tomb, which dozens of famous hands contributed to making a true masterpiece of Renaissance sculpture, and to enjoy leisurely contemplation of the life of monastic scholarship he pioneered.  Also gelato.  Knowing I answer to “gelato snob” my guide took me to two exceptional establishments, one tucked inconspicuously in a portico which offered extraordinary seasonal real fruit flavors including Pear with Cinnamon and Spiced Apple, both of which were stunning, and a second, large and clearly famous place (delightfully close to Dominic’s resting place) which offered Ricotta with Sicilian Lemon, pear, and a Granita di Pompelmo Rosa (pink grapefruit granita) which packed the full, intensified ferocity of the most aggressive natural citrus.

“Medici balls!” I cried as we reached the university, and there they were, bulbous and grandiose over a gateway.  My companion, mainly a social historian, had apparently taken little notice of pope Clement’s marble signature, and correctly observed that the building must have been renovated during his papacy, but to me it was a more striking moment.  The Medici crest, with its collection of five or six balls, representing medicinal pills (Medici <= Medico <= doctor) is on virtually every decoratable surface in Florence, a universal reminder of the great patrons, their many projects, and their eventual victory, so when I leave Medici country I always enjoy the telling contrast of their absence, and the presence of some other local symbol, the Venetian Lion of St. Mark, or the… 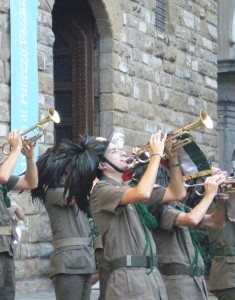 (half an hour later)  Right.  Not a big thing, just a parade and concert by the brass band of the Florentine civic militia corps of something something that have amazing hats.

Where were we?  Medici balls in Bologna.  It hit me just as it was intended to, a shocking, unexpectedly long reach by the neighbors who were certainly never lords in Bologna, but still had their fingers in the university which was Bologna’s pride and fame.  I was impressed; centuries later I was still impressed.

There was also a Roman legionary cohort camped in the main square.  But since the trumpeters have slowed me, the Legio I Italica Novae Moesia (67-425 DC) must wait for another day.

Hopefully next time the canals will have enough water for me to tour the underbelly.